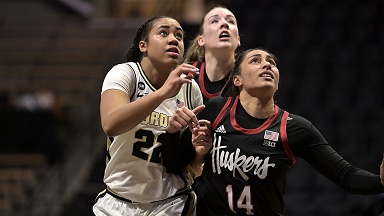 Bourne, who hit 10-of-17 shots from the field including a pair of three-pointers, added seven rebounds while playing a career-high 38 minutes for the Huskers. Nebraska slipped to 3-3 overall with the setback and 1-2 in the Big Ten with its second straight road loss in the state of Indiana. Purdue improved to 5-2 overall and 2-1 in the conference with the win.

Fellow sophomore Ashley Scoggin matched her career high with 16 points for the Huskers. Scoggin played an excellent floor game for the Big Red, hitting 6-of-10 shots including 2-of-4 three-pointers while adding four rebounds, three assists and two steals.

Junior guard Sam Haiby matched Scoggin with 16 points, three assists and a pair of steals for Nebraska as well, while Kate Cain contributed 12 points on 6-of-10 shooting. Cain managed a pair of assists and two blocks.

Although Nebraska’s fifth starter, Bella Cravens, fell short of double figures in points with six, the 6-3 forward led the Big Red on the glass with 10 rebounds while adding two assists, two blocks and a steal of her own.

The five starters combined for all 72 of Nebraska’s points on the day against a hot-shooting Purdue team, which hit 47.6 percent (30-63) of its shots from the field including 45.5 percent (10-22). The Boilermakers also got 32 points off their bench, including 13 points from two-time All-Big Ten guard Karissa McLaughlin who hit 5-of-6 shots from the floor including 3-of-3 from three-point range. McLaughlin, who was making her second appearance of the season while recovering offseason ankle surgery, got her 13 points in just 13 minutes. Purdue was plus-10 during McLaughlin’s minutes on the court.

Kayana Traylor led Purdue with 21 points while adding a game-high seven assists as the only other Boilermaker in double figures. However, three Boilers – Brooke Moore, Jenelle Grant and Fatou Diagne – all had nine points for a balanced attack. Diagne also led all players with 17 rebounds in 25 minutes.

Nebraska will enjoy several days for the holiday break before returning to action against defending Big Ten regular-season champion Northwestern. Tip-off between the Huskers and No. 16 Wildcats is set for 1 p.m. on New Year’s Eve at Pinnacle Bank Arena.