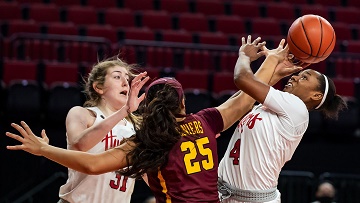 Minneapolis – Sam Haiby scored a game-high 22 points but it was not enough to prevent home-standing Minnesota from closing out a 73-63 victory over the Nebraska women’s basketball team in Williams Arena on Wednesday night.

Haiby’s three-point play with 3:43 left tied the game at 62, but the Huskers did not hit another field goal the rest of the way, as the Golden Gophers closed on a 10-1 surge to secure the win. Nebraska slipped to 11-10 overall and 9-9 in the Big Ten, while Minnesota improved to 8-11 and 7-10 in the conference.

Gadiva Hubbard and Klarke Sconiers led four Gophers in double figures with 14 points apiece, but it was Kadi Sissoko who made the difference in the decisive Minnesota burst to close the game. Sissoko scored eight of her 10 points in the fourth quarter, including a pair of shots in the paint to push Minnesota’s edge to 68-63. Nebraska was unable to find an answer from the field, and Hubbard and Scalia sealed the win with four straight free throws. Scalia finished with 11 points including 6-of-6 free throw shooting.

In addition to 22 points from Haiby, the Huskers got 13 big points off the bench from freshman Annika Stewart, who hit 5-of-6 shots including 3-of-4 three-pointers. A third Minnesotan, freshman early enrollee Kendall Coley buried a pair of three-pointers to finish with a career-high six points. Those three combined to hit 8-of-13 threes, but the rest of the Huskers hit just 1-of-6 from long range.

NU’s other three came from Ashley Scoggin on Nebraska’s first made field goal of the game. Scoggin, who finished with seven points, put the Huskers up 3-2, but they only regained a momentary lead at 30-29 on a three from Stewart before halftime. Those were the only two leads for Nebraska on the night in a game that was tied at 51 at the end of three quarters, and tied again at 53, 56 and 62 in the fourth before Minnesota pulled away.

Minnesota led for nearly the entire first half but carried just a 31-30 halftime lead. The Huskers trailed by seven points on multiple occasions early in the second quarter before getting back-to-back threes from Coley and Stewart to cut the Golden Gopher margin to 26-25. The Huskers then tied the score at 27 on a pair of Ruby Porter free throws before another three-pointer by Stewart put the Huskers on top 30-29.

Haiby led the Huskers with eight points including a first-quarter buzzer-beating three-pointer. Stewart added six points on a pair of threes while Scoggin pitched in Nebraska’s first five points of the game. Nebraska hit 10-of-27 shots from the floor, including 6-of-11 threes, while going 4-for-4 at the free throw line.

Nebraska returns to Big Ten home action on Saturday when the Huskers play host to Michigan State. Tip-off against the Spartans is set for 1 p.m.