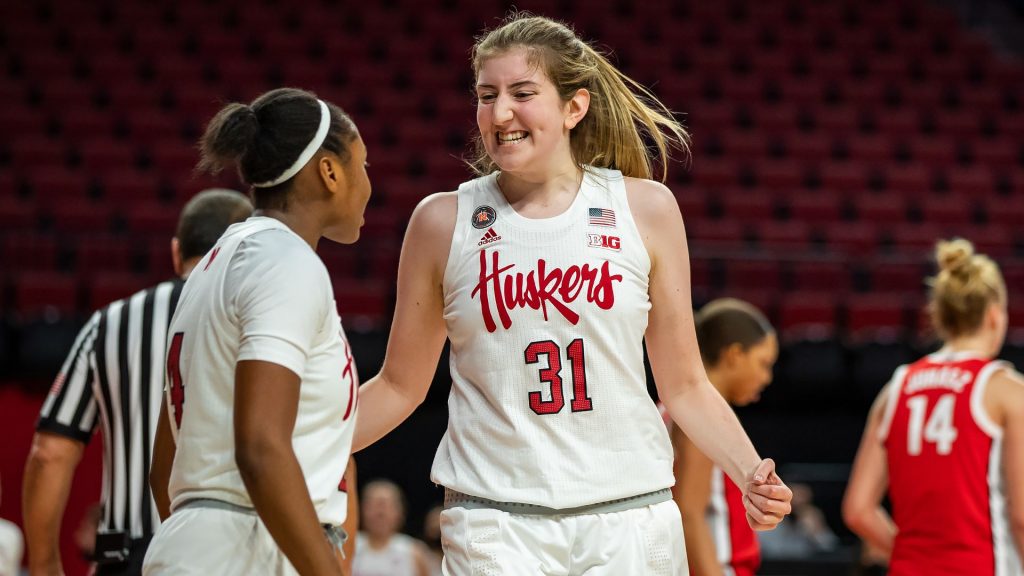 Lincoln – Senior center Kate Cain nearly unleashed a triple-double while tying her career high with 22 points, and Nebraska got a monumental team defensive effort on its way to a 63-55 women’s basketball win over previously unbeaten and No. 15 Ohio State at Pinnacle Bank Arena on Saturday afternoon.

Playing without their second-leading scorer and rebounder Isabelle Bourne who was out with an ankle injury, the Huskers not only got 22 points, 12 rebounds and nine blocked shots from Cain, they also got 11 points, 10 assists and eight rebounds from junior guard Sam Haiby. While Cain produced the most dominant performance at both ends of the court in her Husker career, Haiby controlled the tempo for the Big Red throughout, as Nebraska held the Buckeyes 35 points below their season scoring average. Nebraska improved to 7-4 overall and 5-3 in the Big Ten.

Nebraska nearly led wire-to-wire in knocking off their third top-15 opponent in the last 17 days, including their second win over a previously unbeaten and Associated Press No. 15 Big Ten foe (also Northwestern, Dec. 31). Nebraska put on a defensive clinic in the first half, holding a Buckeye team that entered the contest averaging 90 points per game to just 21 first-half points. Ohio State, which was bolstered by the return of first-team All-Big Ten forward Dorka Juhasz after she missed the past three games, jumped to a quick 4-0 lead, but Nebraska answered with a 7-0 run, including the first two points from Haiby and the last three from Cain to take a 7-4 lead at the first media timeout. From that point, Nebraska never trailed again the rest of the way against the Buckeyes, who slipped to 7-1 overall and 3-1 in the Big Ten.

In addition to the huge games from Cain and Haiby, Nebraska got career highs of 14 points and four three-pointers from freshman walk-on Whitney Brown. The 5-8 guard from Grand Island, Neb., helped a short-handed Husker bench of just true freshmen Brown and Annika Stewart, outscore the Buckeye bench 14-3. Brown’s first three-pointer gave the Big Red its biggest lead of the first quarter at 14-8. Her second three pushed NU’s lead to 25-19 after the Buckeyes had closed to within a possession. Then fellow freshman Ruby Porter, who made her first career start in place of fellow Australian Bourne, hit a three with 1:06 left in the second quarter to give Nebraska its biggest lead of the half at 30-19.

In the third quarter, Brown buried her third three-pointer to extend Nebraska’s lead back to 11 at 45-34, after the Buckeyes had trimmed the margin to five early in the period. Her fourth three came midway through the fourth to push Nebraska’s margin to 12 at 55-43. NU’s biggest lead of the game came at 52-38 on a Cain bucket with 6:47 left in the contest.

Although Nebraska extended the lead throughout most of the game, the Buckeyes battled in the final three minutes by getting five straight points from Juhasz, who finished with 13 points and 12 rebounds, before a Madison Greene three-pointer capped an 8-0 run over a three-minute span to pull within 57-54.

But Haiby stepped up with the game’s biggest offensive play, a strong drive to the hoop that ended with a layup and a foul. She converted the traditional three-point play to put Nebraska up 60-54 with 44.5 seconds left, and the Huskers held the Buckeyes without a field goal in the game’s closing minute.

Nebraska’s suffocating defense held Ohio State to just 27.2 percent (22-81) shooting, including 5-of-27 threes. The Buckeyes hit four three-pointers in the fourth quarter after opening the game 1-for-20. Nebraska hit 41.4 percent (24-58) of its shots, including 6-of-22 threes (.273), while going 9-for-14 at the free throw line. Nebraska dominated the glass against the Buckeyes, 54-44, in large part to the efforts of Bella Cravens, who finished with six points and a game-high 14 rebounds. The Buckeyes dominated the turnover department, 19-6, including 13-2 in the second half, but Ohio State was only able to cut one point off Nebraska’s halftime lead despite being plus-11 in the turnover department in the final 20 minutes.

The Huskers held a 14-12 edge after the first quarter and built a 30-19 lead with an 8-0 run late in the second quarter. Braxtin Miller hit a short jumper for Ohio State at the buzzer to end a 4:44 scoreless drought and pull the Buckeyes to 30-21 at the half.

Nebraska shoots for its fifth win in the last six games when the Huskers take on Minnesota Tuesday afternoon at Pinnacle Bank Arena. Tip-off between the Huskers and Golden Gophers is set for 3 p.m.