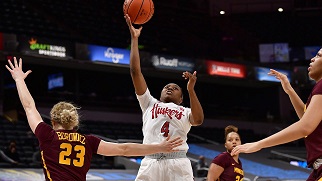 Indianapolis – Nebraska used an explosive 18-3 surge midway through the first half to build a 38-21 halftime lead and never looked back in a 72-61 win over Minnesota in the second round of the Big Ten Women’s Basketball Tournament at Bankers Life Fieldhouse on Wednesday.

Sam Haiby led the eighth-seeded Huskers with a game-high 19 points while adding eight rebounds and three assists. The All-Big Ten guard helped the Big Red improve to 12-11 overall heading into Thursday’s quarterfinal game with No. 1 seed Maryland. The junior from Moorhead, Minn., started Nebraska’s 18-3 spurt with her layup late in the first quarter  to give Nebraska a 13-11 lead.

Fellow Minnesotan Kendall Coley also played a major role in surge, knocking down a three-pointer at the buzzer to end the first quarter to stake NU to 16-11 lead at the end of the period. Then with Nebraska leading 20-14, the freshman early enrollee out of St. Louis Park High School, buried her second three-pointer to give the Big Red a 23-14 edge with 7:14 left in the half. A pair of Haiby free throws gave the Huskers their first double-digit edge, before back-to-back buckets by Bella Cravens and Kate Cain extended the lead to 29-14 and force a Minnesota timeout with 4:09 left in the half.

Cain, who closed the game with 16 points, six rebounds and two blocks, finished the first half with eight points, three rebounds and a steal, while Coley and Isabelle Bourne each contributed six points. Cravens played well with four points, two rebounds, two assists and two steals, while freshman Whitney Brown quarterbacked the Husker surge with five assists in a six-minute span. Brown finished the game with a career-high six assists to go along with four rebounds.

Bourne, who joined Cain as an honorable-mention All-Big Ten pick during the season, added 14 points and seven boards to give the Huskers three players in double figures, while Ashley Scoggin pitched in nine points.

In the first half, Nebraska hit 15-of-31 first-half shots, including 4-of-10 threes. The Huskers also went 4-for-4 at the free throw line. NU out-rebounded Minnesota 19-14. Nebraska won the first-half turnover battle 9-5, and more importantly outscored Minnesota in points-off-turnovers 14-0.