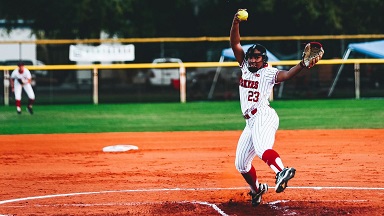 The Nebraska softball team dropped the first game of its Sunday doubleheader with Ohio State, 4-2, in a well pitched game by both teams at the Sleepy Hollow Sports Complex in Leesburg, Fla.

There were only eight combined hits in the game. Nebraska (2-3) didn’t get its first base runner until the fifth inning and produced only two hits –  a double from senior cam Ybarra and an inside-the-park home run from senior Tristen Edwards. Ohio State managed five hits, four of which were singles.

Senior Olivia Ferrell (1-3) started and allowed four runs  in 5.0 innings. Freshman Kaylin Kinney pitched the final two innings and did not allow a run while surrendering only one hit. Payton Buresch (2-0) tossed a two-hitter for Ohio State (3-2), allowing two runs (one earned).

Ohio State mounted the game’s first scoring threat in the top of the third. A leadoff hit batter, a sacrifice bunt and a two-out infield single put Buckeyes on the corners before Ferrell escaped the jam with a groundout.

The lone of hit of the game through the first four innings was an infield single but that changed in the top of the fifth. Following a leadoff walk, Sam Hackenbracht doubled to the gap in right center. Mariah Rodriguez then delivered a two-run single up the middle to give Ohio State a 2-0 lead. The Buckeyes still had a runner at second with no outs but Ferrell retired the next three batters.

The first 13 Husker hitters were retired before Ybarra became Nebraska’s first base runner with a one-out double in the bottom of the fifth. Owen then reached on an error which allowed freshman pinch runner Camyl Armendariz to score Nebraska’s first run.

In the top of the sixth, an Ohio State batter was hit by a pitch to begin an inning for the third time in the game. A bunt single put Buckeyes on first and second with no outs, and Nebraska brought Kinney in from the bullpen. A wild pitch moved the runners up to second and third but Kinney retired the next two batters on an infield foul out and a strikeout. A two-out walk loaded the bases before Mariah Rodriguez delivered a two-run single up the middle to give Ohio State to take a 4-1 lead. Rodriguez finished 2-for-2 with four RBIs out of the No. 9 spot in the lineup for the Buckeyes.

Nebraska got one run back in the bottom of the seventh when Edwards hit a fly ball down the right field line that dropped for a hit. Buckeye right fielder Kaitlyn Coffman made a diving attempt at the ball, and by the time she recovered and threw the ball back to the infield, Edwards was crossing the plate with her first career inside-the-park home run. But Buresch retired the next three Huskers to preserve the victory.

Junior right-hander Courtney Wallace was outstanding in a complete-game effort and the Husker offense tacked on a critical insurance run in the top of the seventh inning, as the Nebraska softball team held on for a 2-1 victory over Ohio State Sunday, splitting their doubleheader with the Buckeyes.

Wallace, who was one out away from her first career shutout, moved to 2-0 on the season. She fired a seven-hitter and struck out six.

Nebraska led 1-0 entering the final inning before senior Cam Ybarra delivered a key insurance run with an RBI double. With a runner on second and down to its last out, Ohio State strung together three straight two-out singles, cutting the lead in half before Wallace wrapped up the win by coaxing a ground out with the bases loaded.

With the win, Nebraska split a Big Ten Conference doubleheader for the third straight day to even its record at 3-3. Allison Smith (0-2) took the loss for Ohio State, which also finished the opening weekend with a 3-3 record. Smith allowed two runs (none earned) on four hits in 6.1 innings.

Offensively for Nebraska, Ybarra finished 1-for-3 with a double and an RBI and freshman Billie Andrews was 1-for-4 with a run and an RBI. Seniors Tristen Edwards (1-for-3), Ally Riley (1-for-3) and freshman Kaylin Kinney (1-for-3) also had a hit for the Big Red.

Nebraska jumped out to a 1-0 lead in the top of the third. Unzicker ended up on second base after a leadoff error and scored on an RBI single from Billie Andrews. Andrews moved up to second on the throw home but was stranded there after the next three Huskers were retired.

Unzicker also reached base to lead off the top of the fifth, drawing an eight-pitch walk. Senior Tristen Edwards then reached on a one-out infield single and senior Cam Ybarra walked to load the bases. But the Buckeyes turned an inning-ending double play to keep it a 1-0 game.

After Nebraska stranded a runner at second base with one out in the top of the sixth, Ohio State missed a big opportunity in the bottom of the sixth. A leadoff single, a Husker error and a sacrifice bunt put Buckeyes on second and third with one out. A squeeze bunt attempt was then popped up back to Wallace. She saw the ball pop out of her glove but alertly tagged out the runner heading home. A ground out to second then ended the threat.

In the top of the seventh, an error and a walk gave Nebraska runners at first and second with one out. Courtney Buresch then entered the game to pitch for Ohio State, and Ybarra greeted her with an RBI double to the fence in right to score Billie Andrews and double the Huskers lead at 2-0. The Huskers had a chance to tack on an insurance run or two with runners at second and third with one out but were unable to push another run across.

In the bottom of the seventh, Taylor Pack led off with a double. After Wallace retired the next two batters, a two-out single kept the game alive with Buckeyes on first and third. A bloop single then scored Ohio State’s first run of the game and another single loaded the bases with Buckeyes. Clinging to a 2-1 lead, Wallace jumped ahead of Mariah Rodriguez before getting her to ground out to third to end the game.

Nebraska is off next weekend before returning to Florida in two weeks for a pair of three-game series against No. 17 Michigan and Purdue.