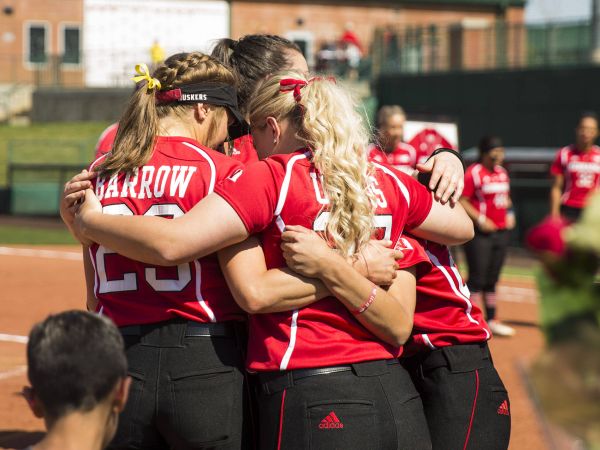 Lincoln – Everything was clicking for the Nebraska softball team on Friday, as the Huskers defeated Penn State 9-0 in five innings in game one of a four-game series at Bowlin Stadium.

Offensively, Nebraska hit three home runs against a Penn State pitching staff that had allowed only one home run in its first 12 games. Freshmen Sydney Gray and Kaylin Kinney each slugged the first home run of their careers, while junior Peyton Glatter hit a pinch-hit home run for her first homer of the season. Gray finished 2-for-3 with a pair of extra-base hits, two runs scored and an RBI. Kinney was 1-for-3 with a two-run homer, and Glatter hit a two-run homer in her lone at bat. Freshman Billie Andrews also went 2-for-3 and junior Anni Raley was 2-for-2 with a triple, two runs scored and a pair of RBIs.

That was more than enough support for senior right-hander Olivia Ferrell, who recorded her first career shutout. Ferrell (4-4) tossed a three-hit shutout and struck out seven Nittany Lions, tying her season high in strikeouts despite the five-inning game.

Nebraska (7-6) scored a season-high nine runs and posted its first shutout since the final home series of the 2019 season. Bailey Parshall (0-7) took the loss for Penn State (0-13), allowing four runs on five hits in 3.0 innings.

After stranding a pair of runners in the first, Nebraska scored three times in the bottom of the second inning. Gray led off with a single and Billie Andrews followed with a bunt single. A double steal moved Gray to third and Andrews to second. Two batters later, Raley grounded a ball through the left side and a bad hop in the outfield turned her hit into a two-run triple. After senior Rylie Unzicker was hit by a pitch, freshman Caitlynn Neal grounded out to first to score Raley and push the Husker lead to 3-0.

The Huskers stretched the lead to 4-0 when Gray hit a solo home run with two outs in the bottom of the third.

In the bottom of the fifth, Raley led off with a single before Glatter came on and delivered a pinch-hit, two-run homer to center to give Nebraska a 6-0 lead. Neal then reached on an error and scored on an RBI double from senior Cam Ybarra. Kinney followed with her two-run homer that accounted for the final 9-0 margin.

Ferrell preserved the shutout by working around a leadoff double in the top of the fifth.

Nebraska and Penn State continue their four-game series with a Saturday doubleheader beginning at Noon.