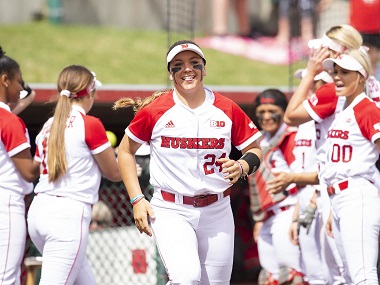 Cathedral City, Calif. — Despite battling, Nebraska (6-8) came up just short against No. 7 Florida (16-2), falling 6-3 on Sunday in the final game of the Mary Nutter Collegiate Classic.

Nebraska had several opportunities to make some noise, scoring the first run and hitting the only home run of the game. However, NU surrendered one unearned run and left two runners on third to give the Gators the edge. Tristen Edwards went 2-for-3 with two runs, two RBIs and a homer. Cam Ybarra hit her first triple as a Husker and Samantha Owen also had one hit.

Florida’s Natalie Lugo (6-1) pitched started and pitched 5.0 innings. She was pulled in the middle of the game but pitched the final inning for a total of 6.0 innings. She gave up three runs on four hits and had eight strikeouts.

Nebraska got right to work, scoring one run in the bottom of the first. Edwards hit a leadoff single and Unzicker bunted to move her over. Edwards reached third on a fly out and scored on a wild pitch.

Florida took a 2-1 lead in the third, scoring two runs off three hits.

In the fourth, Ybarra hit a one-out triple to put the tying run on third, but the Gators got back-to-back strikeouts to end the inning.

The Gators extended their lead in the fifth, scoring three runs on two hits and one Husker error.

In the sixth, the Huskers cut the lead to 5-3. Wallace drew a walk and Edwards hit a two-run homer, which forced a Florida pitching change. Unzicker drew another walk and stole second. She moved to third on a ground out but would get stranded there as the Huskers couldn’t score her.

In the final inning, Florida added an insurance run after a hit batter and a double. Nebraska attemped the comeback in the bottom of the inning. Owen hit a leadoff single and Bree Boruff pinch ran for her. However, the Gators retired the next three batters to end the game.

The Huskers are back in action on Feb. 29 when they travel to Columbia, Mo., to take on Missouri. First pitch is set for 11:30 a.m