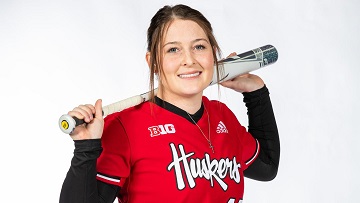 Four freshmen stole the show for the Nebraska softball team on Sunday, as the Huskers captured a series victory over Purdue with a 3-1 win in the rubber match in Leesburg, Fla.

With the win, Nebraska evened its season record at 6-6 and finished with a 3-3 record this week in a pair of three-game series against No. 23 Michigan and the Boilermakers.

In the circle, senior right-hander Olivia Ferrell earned the win. Ferrell (3-4) allowed one run on six hits and struck out five over the first 5.0 innings. Junior right-hander Courtney Wallace pitched a perfect sixth and seventh inning to earn her first save of the season and the second of her career.

Nebraska nearly opened the scoring in the top of the first inning when senior Tristen Edwards drew a one-out walk and senior Ybarra followed with a single, but a double play ended the inning.

Purdue the loaded the bases with one out in the bottom of the first on a leadoff single to left, a bunt single and another infield single. But Ferrell escaped the jam with a strikeout and a pop out.

In the top of the second, Green and Gray reached on back-to-back one-out singles. Green was then thrown out at home on an attempted double steal, but Billie Andrews followed with an RBI double to left center to score Gray with the game’s first run. Neal then hit a ball down the left field line for an RBI single, and she was able to come all the way around and score on an error by the left fielder to push the Husker lead to 3-0.

Rachel Becker trimmed the Husker lead to 3-1 when she hit a solo home run with one out in the bottom of the fifth inning.

The Huskers got a trio of singles from senior Ally Riley, Green and Gray in the top of the sixth inning, but a double play spoiled Nebraska’s scoring chances.

Nebraska then looked to add to its lead in the top of the seventh when Neal led off with a single and advanced to second on an error. Edwards and Ybarra then drew consecutive one-out walks to load the bases and force a Purdue pitching change. But a fourth Boilermaker double play once again kept Nebraska off the scoreboard.

The missed opportunity would not matter as Wallace pitched a 1-2-3 seventh to earn the save and secure the Husker victory.

Nebraska will be off next week before returning to action by welcoming Penn State to Bowlin Stadium for a four-game series March 27, 28 and 29.