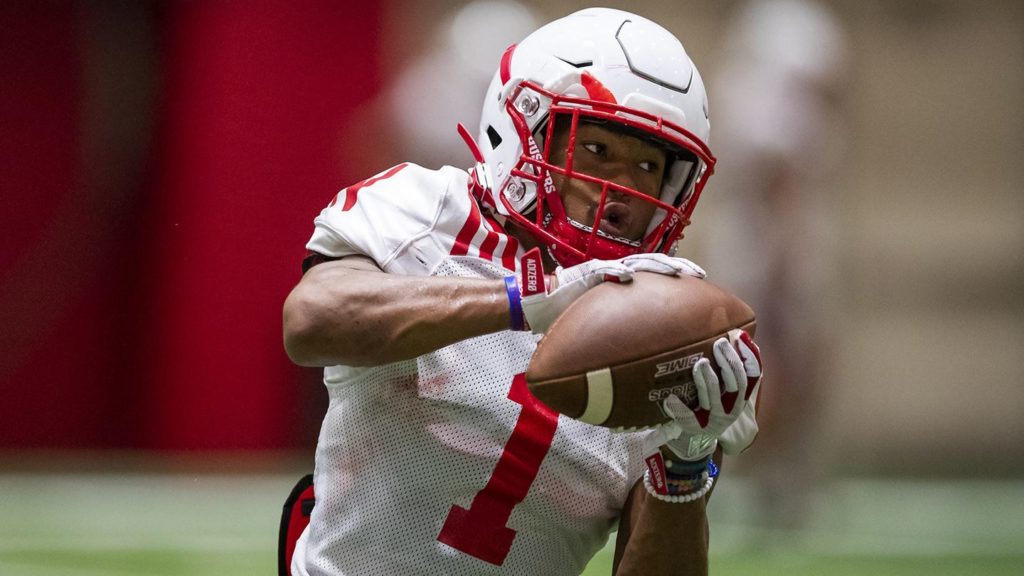 Offensive Coordinator Troy Walters addressed the media after the conclusion of practice to talk about the depth that the team has at receiver.

“I feel good about the guys,” he said. “How we practice, we practice fast, we split field. So everybody that was a part of our fall camp, they were getting reps and so we believe that you get better by taking reps. So I feel comfortable and confident that the guys behind, the guys that we have that are going to suit up will be able to go out there and make plays. We cross train guys, so JD (Spielman) will have to play outside some, inside some, Wan’Dale (Robinson too). We’ll move guys around and go to work.”

Walters went on to talk about the offensive line and how he has seen the players gel as a unit.

“They’ve come a long ways,” Walters said. “I’m very pleased with their work together as a unit. What you really notice is them coming off the ball and establishing a new line of scrimmage. I think we’re tougher than we were last year, we’re more aggressive, more athletic and so I’m very pleased with that. This offense comes down to running the football and I feel confident going into this first game that we’re going to be able to run the football with the guys up front leading the way.”

Walters also commented on freshman Wan’Dale Robinson and what he has done to earn a starting spot.

“He’s a playmaker. He’s a playmaker,” Walters said. “When his number is called he goes out there, he makes plays. He’s versatile, he can line up at receiver, line up at running back but the biggest thing was he had a lot of ‘wow’ plays. Which means when the ball was in his hands he made plays and as coaches we said ‘wow’. So we’ve got to get him on the field, we’ve got to get the ball in his hands because he is dynamic.”

Walters was asked if he plans to use Robinson primarily as a wide receiver or running back. “Oh all over the field,” Walters said. “As a returner, as a running back, as a receiver. When he gets the ball in his hands he can make something happen. So I am very excited about his debut and his work, his preparation has been awesome this week and he’s ready to go.”‘

(Video) Scott Frost takes questions from the media ahead of the first game of the 2019 season.

Walters was also asked about the game plan for Saturday’s season opener with South Alabama.

“First game of the season, you don’t really know what they’re really going to do,” he said. “We’re going off of last year’s tape and what we think, but we have to be ready to make adjustments so it really comes down to focusing on us.

“We have to run the football, we have to take care of the football, and then we have to make explosive plays and eliminate penalties. If we do that then it gives us a chance to win, and it’s going to be a great opportunity to go to Memorial Stadium and play in front of our fans again and really continue where we left off last year.”

The Huskers will finish preparations for South Alabama with another practice on Thursday, followed by a walkthrough on Friday. Kick off for the 2019 season will be Saturday, August 30 at 11 a.m. at Memorial Stadium. Television coverage will be provided by ESPN.