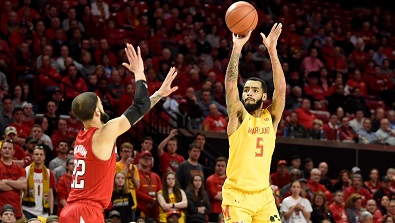 Despite being down one starter and playing its second road game against a ranked opponent in four days, the Nebraska men’s basketball team gave No. 9 Maryland all it could handle in a 72-70 loss Tuesday night at the XFINITY Center.

The Huskers, who trailed by 13 after a cold-shooting first half, used a late rally to put themselves in position to pull the upset. NU trailed 71-64 with less than a minute to play before a 6-0 run made it a one-point game. After Maryland missed the front end of a 1-and-1, Nebraska had a chance to take the lead but Cam Mack, who had just knocked down a pair of clutch free throws, had his potential game-winning layup blocked by Jalen Smith, who then made his first free throw with 0.7 seconds remaining before intentionally missing the second, and the clock expired on the rebound.

With the win, Maryland improved to 20-4 on the season and remained atop the Big Ten Conference standings with a 10-3 record in league play. Despite a valiant effort, Nebraska fell to 7-17 on the season and dropped to 2-11 in Big Ten play.

The Huskers, who were without third-leading scorer Dachon Burke Jr. due to illness, outscored Maryland 45-34 in the second half, even though the Terrapins made six of their final seven shots. Nebraska shot 55 percent in the second half but only hit 41 percent of its shots in the game. The Huskers attempted a season-high 33 3-pointers but made just seven of those attempts.

Haanif Cheatham, who was questionable for the game after suffering an injury Saturday at Iowa, led the second-half comeback by scoring 18 of his game-high 20 points in the final period. Thorir Thorbjarnarson added 15 for the Huskers, while Matej Kavas provided a big boost of the bench, chipping in 11 points. Mack dished out eight assists for the Big Red to become the fourth Husker to record 150 assists in a season.

Smith (16 points, 13 rebounds), Donta Scott (10 points, 10 rebounds) and Anthony Cowan (13 points, 10 assists) all had double-doubles for Maryland. Eric Ayala joined that trio in double figures with 16 points, as he knocked down 4-of-8 from beyond the arc.

Nebraska scored on a Mack layup on its opening possession before the Huskers’ shooting went ice cold. NU missed nine straight shots at one point and opened the game just 3-of-15 from the field and 1-of-10 from the 3-point line. Maryland took advantage with an 8-0 run during a five-minute Husker scoring drought, building a 16-10 lead eight minutes into the game.

The Huskers pulled back within one three minutes later thanks to a 7-0 run, with Thorbjarnarson scoring the final five points of the run. But Nebraska then went scoreless for more than four minutes, as Maryland scored 10 straight points to take a 30-19 lead.

Nebraska quickly cut the lead back to eight but the Huskers didn’t make a basket over the final three minutes of the half, and Maryland scored six of the final seven points of the period to take a 36-25 lead into the locker room. NU shot only 27 percent in the first half and had a five-minute stretch and two three-minute stretches without making a basket. The Huskers were just 9-of-33 from the field and 3-of-20 from beyond the arc in the first half.

NU shot the ball better to start the second half, knocking down seven of its first nine shots, cutting the lead to single digits at 47-40 less than five minutes into the period. Following the hot start, the Huskers went scoreless for nearly three minutes as Maryland pushed the lead back to 12.

But Nebraska would not go away as the Huskers scored seven straight points as part of a larger 12-2 run that forced a Maryland timeout with the Terrapins on top 56-54 with 7:28 to play. Maryland responded with an 8-0 run out of the timeout to push the lead back to 10 before Cheatham scored Nebraska’s next eight points to help the Huskers cut the lead to 66-62 with 2:24 remaining.

It remained a four-point lead one minute later until Darryl Morsell drilled a clutch 3-pointer, which was answered by Kevin Cross. Nebraska called a timeout following Cross’ 3-pointer, the Huskers got a steal on the ensuing possession and Cheatham knocked down a free throw to cut the lead to 71-68 with 35.6 seconds remaining. Maryland then missed the front end of a 1-and-1, giving Nebraska the ball back. Ahead by three, Maryland elected to foul Mack, who went to the line and hit two clutch free throws to make it a 71-70 game with 12.9 seconds left.

Maryland again missed the front end of a 1-and-1 and Mack drove into the lane where Smith blocked the shot to seal the win.

Following a pair of road games against top-25 foes, Nebraska returns home on Saturday to take on Wisconsin. Tipoff at Pinnacle Bank Arena is set for 1:15 p.m., and the game will be televised on the Big Ten Network with the Husker Sports Network providing live radio coverage.

Nebraska Post-Game Notes
Nebraska fell to Maryland 72-70, as the Terrapins remained perfect at home this season (14-0). The two-point margin marked the seventh time in the 10 all-time meetings between Nebraska and Maryland that the game has been decided by five or fewer points.
The Huskers have played four games at the XFINITY Center, with the four games decided by a total of 10 points, including three straight games by two points.
Nebraska went 7-of-33 from the 3-point line in tonight’s game. With the seven makes, the Huskers have made 200 3-pointers this season, becoming the 10th team in school history to make 200 3-pointers in a season.
With the season-high 33 3-point attempts, the Huskers have shot 611 3-pointers this year, becoming the seventh team in school history to attempt 600 3-pointers in a season.
Haanif Cheatham, who was questionable for the game after suffering an injury Saturday at Iowa, scored a game-high 20 points, including 18 in the second half. His 21 points were his second-highest total in Big Ten play and marked his third 20-point game this season.
Matej Kavas scored 11 points, marking his first career Big Ten Conference game in double figures. It was his first double-figure effort since Dec. 29.
Cam Mack dished out eight assists in the game to give him 156 assists this season. He passed Tyronn Lue (152) to move into fifth place on Nebraska’s single-season assists list, while becoming only the fourth Husker to record 150 assists in a season.
Freshman Kevin Cross made his first career start as Nebraska utilized its sixth different starting lineup this season. Cross became the third true freshman to start for the Huskers this season, joining Charlie Easley and Yvan Ouedraogo.