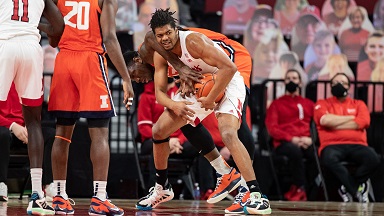 The Nebraska men’s basketball team took No. 6 Illinois to overtime on Friday at Pinnacle Bank Arena and had a shot to win in regulation before falling 77-72.

Nebraska, which took a 66-64 lead with Dalano Banton’s basket with 37.8 seconds left, called timeout with 16 seconds left to set up the potential go-ahead basket, but could not pull out the win in regulation.

Dosunmo got Illinois (14-5, 10-3 Big Ten) going in the extra session, scoring the first five points as the Illini never trailed in overtime. Nebraska cut the deficit to 72-70 on a pair of Teddy Allen free throws with 1:37 left, but could get no closer as Dosunmu’s jumper with 15 seconds left iced the win.

Mayen finished with a career-high 16 points to lead three Huskers in double figures, as Trey McGowens and Allen chipped in 15 apiece. Despite a 21-point, 13-rebound performance from Kofi Cockburn, the Huskers out-rebounded the Illini, 40-39, with Walker and Allen grabbing eight caroms apiece.

The Huskers jumped out to an early 9-0 lead in the game, with Mayen scoring Nebraska’s first five points on the night before Illinois responded with a 11-2 run to tie the game. The Huskers, who never trailed in the half, got major production from their bench in the opening 20 points, as Thorir Thorbjarnarson had eight points, including a pair of 3-pointers, while Shamiel Stevenson had five more as NU took a 34-33 lead into the break.

The second half was dominated by scoring runs by both the Illini and Huskers after the teams traded baskets to begin the half. Nebraska led 52-41 after a McGowens free throw with 11:16 left, but the Illini came back with 10 straight points to take a 56-53 lead on a Trent Frazier 3-pointer with 7:48 left.

The Huskers would battle back with nine straight points, including a pair of baskets by McGowens and a Mayen 3-poionter to lead 61-56 with 3:49 remaining.

Nebraska is set to take off for a three-game road trip next, starting at Penn State on Sunday, February 14. The game tips off at 2 p.m. CT