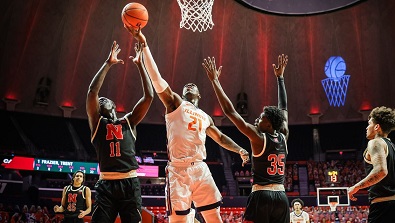 The Nebraska men’s basketball team trailed No. 5 Illinois by just six three minutes into the second half, but a series of runs buried the Huskers in an 86-70 loss to the Illini Thursday night.

The win came less than two weeks after the Illini needed overtime to escape Lincoln with a five-point victory. Illinois improved to 17-6 on the season and remained in second place in the Big Ten standings with a 13-4 record in conference play. Nebraska fell to 5-17 overall and 1-14 in the Big Ten.

Trey McGowens paced three Huskers in double figures with 18 points, giving him 35 points in his last two contests. McGowens scored 15 of his 18 points in the second half. Shamiel Stevenson added 12 points – two shy of his season high – and Kobe Webster chipped in 12 points after he was held scoreless in the first matchup with the Illini.

Illinois was led by Cockburn, as the All-America candidate had a game-high 24 points on 8-of-10 shooting from the field and an 8-of-10 effort from the line. Adam Miller added 18 points – his most in a Big Ten game this season – while Jacob Grandison had a season-high 14 points. Andre Curbelo nearly had a triple-double, finishing with 10 points, 12 rebounds and eight assists.

Illinois scored six straight points early to take a six-point lead seven minutes into the game. Nebraska answered with five straight points to cut the lead to one and the game remained close, with the Huskers pulling to within 23-21 with five minutes left in the half.

But Miller scored seven straight points during an 11-2 Illini run that turned the two-point lead into a 34-23 advantage with two minutes until halftime. The Huskers continued to trail by 11 until Webster knocked down a 3-pointer in the closing seconds of the half to trim the deficit to 36-28 at the break.

Nebraska shot just 41 percent from the field in the first half, including only 2-of-9 from beyond the arc. Illinois shot 52 percent and got a big boost from Miller, who scored 16 first-half points, double his season scoring average.

Dalano Banton opened the second half with a basket as Nebraska cut the lead to six. After Illinois pushed the lead back to 10, Eduardo Andre and McGowens connected on back-to-back buckets to make it a 42-36 game with 17 minutes remaining. But Cockburn responded with nine straight points to put his team up by 15.

McGowens answered Cockburn by scoring six straight points – giving McGowens 10 of NU’s 14 second-half points to that point – as the Huskers cut the lead back to single digits. Illinois quickly pushed the lead back to 16 before Nebraska scored five points in just 27 seconds.

Illinois continued to keep Nebraska at bay by trading baskets with the Huskers over the next four minutes, maintaining its 11-point advantage at 69-58 with 7:13 to play. It was a 12-point game with six minutes to play, but Illinois scored 12 of the next 15 points to put the game away.

Nebraska scored 41 second-half points and shot 44 percent from the field in the final 20 points, but it was not enough to pull off the upset.

Nebraska returns to action on Saturday when the Huskers host Minnesota at 6 p.m.