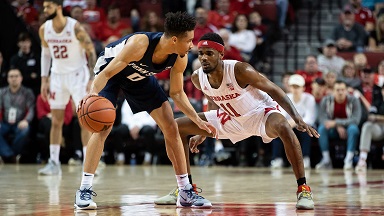 Lincoln – Haanif Cheatham had 15 points and eight boards to lead three Huskers in double figures, but Nebraska could not sustain a strong start in a 76-64 loss to No. 24 Penn State Saturday night at Pinnacle Bank Arena.

Nebraska raced out to an early 9-2 lead and hit its first five field goals, as Cheatham scored 10 of the Huskers’ first 13 points as Nebraska jumped out to an early 13-7 lead. The Huskers (7-15, 2-9 Big Ten) led 20-18 after a Thorir Thorbjarnarson 3-pointer, but the Nittany Lions ran off nine straight points to take a 27-20 lead.

The Huskers kept fighting, as Dachon Burke Jr. scored seven straight points as part of a 9-2 run, as the Huskers pull within 31-30 with 4:21 left in the half. NU, which shot 38 percent in the first half, was within striking distance, as Thorbjarnarson’s 3-point play with 46 seconds left made it 38-33 at the break.

Penn State took control by scoring the first eight points of the second half and used a 22-6 spurts in the first seven 7:12 to build a 60-39 lead. Lamar Stevens and Mike Watkins combined for 13 of the Nittany Lions points

Stevens and Myreon Jones had 13 points each to lead four Nittany Lions in double figures, while Watkins had 11 points and a game-high 17 rebounds for the winners, who picked up their second win in 10 games in Lincoln.

In addition to Cheatham, Thorbjarnarson had 12 points, while Burke Jr. added 11 markers for the Huskers.

Nebraska is off until next Saturday, Feb. 8, when the Huskers take on No. 18 Iowa in Iowa City. Tipoff is at 5 p.m.