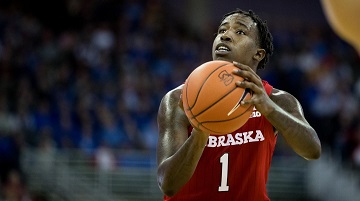 Indianapolis – Nebraska held a 33-27 lead with 4 minutes remaining in the first half, but Indiana responded with a 16-1 run going into halftime and pulled away for an 89-64 victory in the first round of the Big Ten Conference Tournament at Bankers Life Fieldhouse.

Nebraska closes its season with a 7-25 record. Indiana advances to face Penn State in Thursday’s quarterfinals.

Freshman forward Kevin Cross scored a career-high 23 points, going 4-of-9 on 3-pointers, and senior guard Haanif Cheatham added 17 for the Huskers, who played their second straight game with only seven scholarship players. To help with depth, Nebraska football players Noah Vedral and Brant Banks joined the team for the Big Ten Tournament, and both entered with 2:39 remaining and Nebraska trailing by 21. Neither player scored.

After their big run to end the first half, the Hoosiers (20-12) opened with a 15-4 run over the first 4:11 of the second half. They pushed the lead to as many as 21 points with 10:20 remaining before the Huskers mounted a rally.

Cross made a 3-pointer that ended an 11-0 run and pulled Nebraska within 68-58 with 8:22 remaining, and he hit another 3-pointer to cut the deficit to nine points with 7:41 to play. But that’s as close as the Huskers got, as Indiana pushed its lead to its final margin of 25, ending the game on a 12-0 scoring run.

Nebraska shot just 30 percent from the field overall, including 8-of-30 on 3-pointers, and had 12 shots blocked. Indiana, which had 11 players score, shot 53 percent and outrebounded the Huskers 47-36.

Nebraska made five of its first eight field goal attempts of the game, including three 3-pointers, and led 14-13 at the first media timeout.

Indiana responded with a 10-2 run for a 23-16 lead, as Nebraska went through a 1-of-8 shooting stretch. But the Huskers rallied, as Thorir Thorbjarnarson fed Cheatham for a layup to put the Huskers ahead 27-26 to cap an 11-3 run with 7:07 remaining in the first half.

Nebraska pushed the lead to six points during a stretch where Indiana went 1-of-11 from the field and went scoreless for 3 minutes.

But the Huskers went through a 1-of-14 shooting stretch and missed their final eight shots of the first half, as Indiana used a 16-1 run over the final 3:52 to take a 43-34 lead into halftime.