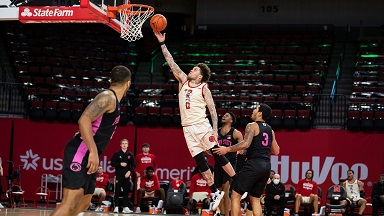 Teddy Allen put on a record-breaking performance Tuesday night as the Nebraska men’s basketball team took Penn State down to the wire before falling 86-83.

Allen finished with a career-high 41 points on 16-of-24 shooting, including six 3-pointers, as his 41 points was one shy of the school mark of 42 by Eric Piatkowski. He tied school marks for points in a home game (Aleks Maric, 2007 vs. K-State) and most field goals made with 16 (Marvin Stewart, 1970 vs. Nevada) while his 28 first-half points broke NU’s single-half record. His performance matched the highest single-game total in the Big Ten this season.  Allen’s 41 points on 16 makes against the Nittany Lions are the most points and made field goals allowed by PSU in a conference game.

Allen fueled the Huskers in the first half, scoring his career-high, record-setting 28 points in 19 minutes of action as the Huskers trailed 39-38 at the break. Nebraska spotted PSU an 8-0 lead before Allen led the Husker charge, scoring 13 points, as the Huskers battled back and tied it at 17.

From that point in the half to halftime, neither team led by more than five points, as Allen and Penn State’s Myreon Jones combined for 45 first-half points. Jones had 17 of his team-high 29 points in the opening 20 minutes, while Allen scored the Huskers’ last nine points of the half to make it a one-point game at the break.

Nebraska took the lead at 48-47 with just under 15 minutes remaining, but PSU used an 11-0 burst to take a 58-48 lead on a Myles Dread 3-pointer with 12:39 left. Allen scored five straight points to make it a five-point deficit and the Huskers kept chipping away, shooting 56 percent in the second half, including 8-of-13 from long range. Trailing 70-64, consecutive 3-pointers form Trey McGowens and Thorir Thorbjarnarson tied it at 70 before Penn State took control. The visitors used an 11-4 run to push it to 81-74 with 53 seconds left on a pair of Jones free throws.

The Huskers had one last run, as McGowens sank a pair of free throws before Thorbjarnarson got a steal and hit both free throws to make it a four-point deficit. After Jones split a pair of free throws, McGowens’ 3-point play made it 82-81 with 22.2 seconds left. Nebraska had one final chance down 86-83, but McGowens, who finished with 17 points, could not hit the game-tying 3-pointer in the final seconds.

The Huskers return to action Thursday, Feb. 25 to take on Illinois on the road. The game tips off from Champaign, Ill. at 6 p.m. (CT)