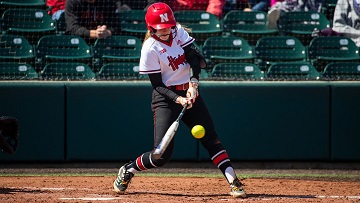 Junior Anni Raley and senior Tristen Edwards each hit two-run homers to power the Nebraska softball team to a 6-4 upset of No. 24 Minnesota in the series finale Sunday at Jane Sage Cowles Stadium in Minneapolis.

Raley’s homer – the first of her career – gave Nebraska a 3-1 in the fourth inning. After Minnesota rallied to tie the game at 4-4, Edwards had the game-winning hit with her two-out, two-run homer in the top of the sixth inning.

With the win, the Huskers (15-13) snapped a 14-game losing streak to Minnesota (22-6), which saw its eight-game winning streak snapped. Raley finished 3-for-4 with a pair of runs and two RBIs, posting career highs in hits, runs and RBIs. Edwards was 2-for-3 with an intentional walk, a run scored and three RBIs. Senior Rylie Unzicker also produced a multi-hit game, going 2-for-4 with a double and a run.

In the circle, junior Courtney Wallace and senior Olivia Ferrell combined on the victory. Wallace (7-5) started and earned the win, allowing four runs on five hits in 5.0 innings. Ferrell picked up her first save of the season by tossing 2.0 scoreless innings of one-hit relief.

After stranding a runner in the top of the second inning, Nebraska loaded the bases with no outs in the top of the third. Raley led off with a single, sophomore Brooke Andrews was hit by a pitch and Unzicker followed with a bunt single. Freshman Billie Andrews then flew out to the warning track in center to score Raley with the game’s first run. Edwards was then intentionally walked to re-load the bases with one out, but Nebraska had to settle for just the one run.

Minnesota tied the game in the bottom of the inning on a one-out solo home run from Natalie DenHartog.

Nebraska answered with a home run of its own in the top of the fourth. Freshman Kaylin Kinney led off with a single before Raley blasted a two-run homer to left to give Nebraska a 3-1 lead. Following the home run, Unzicker doubled with two outs and Billie Andrews walked before Edwards lined an RBI single to right to stretch the lead to 4-1. An error allowed the runners to move up to second and third, but Ybarra lined out to left on a diving catch to end the inning.

Minnesota pulled to within two on another solo home run in the bottom of the fourth, this one from Sara Kinch, her third homer of the series.

The Gophers then tied the game in the bottom of the fifth. A leadoff walk, a sacrifice bunt and an RBI double cut the Husker lead to 4-3 and put the tying run on second base with only one out. Wallace got a big out when she retired DenHartog on a foul out before an infield single and an intentional walk loaded the bases. Sydney Strelow then fouled off several two-strike pitches before drawing a bases-loaded walk to tie the game. Wallace preserved the tie by striking out the next batter.

Brooke Andrews then began the top of the sixth with an infield single. With one out, Billie Andrews flew out to the wall in right before Edwards launched a two-run homer to left center to give Nebraska a 6-4 advantage.

Ferrell came on to pitch the bottom of the sixth and quickly retired the first two batters before issuing a two-out walk. But she got he next batter to fly out to the warning track in left center and end the inning.

In the top of the seventh, the first two batters were retired before Kinney walked and Raley singled. Brooke Andrews then grounded a single up the middle, but Kinney was thrown out at home attempting to score.

In the bottom of the seventh, Ferrell retired the first batter before a bloop single brought the tying run to the plate in the form of Kinch. But Ferrell struck out Kinch on three pitches then got a ground out to third to wrap up the win.

Following the trip at Minnesota, Nebraska returns to Lincoln for its final homestand of the season. The Huskers will host Wisconsin in a four-game series next weekend, followed by a four-game home series against Maryland.