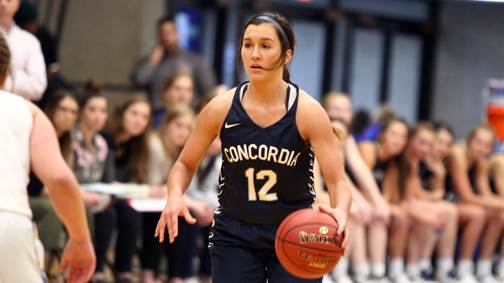 SIOUX CITY, Iowa – One could have had the makings of a dynamite team with two of the spectators that watched from the Bulldog bench: All-Americans Taylor Cockerill and Philly Lammers. For the first time in her career, Lammers missed a game. She watched as the third-ranked Concordia University women’s basketball team rolled to an 18-0 lead out of the gate and cruised to a 76-64 victory at Briar Cliff on Saturday (Jan. 18) afternoon.

Fourteenth-year head coach Drew Olson hopes to have Lammers back soon as they make the push for another GPAC championship. The Bulldogs have run their record to 17-2 overall (12-1 GPAC).

“I thought they did a great job, especially defensively,” Olson said of Briar Cliff. “We couldn’t get anything in the lane and had to work for every basket, but I’m proud of our kids. We started out great. Now when you look at the final score, it was really important to be up 18-0. I thought Claire Cornell gave us some good minutes and then Mack Helman really stepped up big. It was just a good team win.”

Concordia’s quick start wound up being quite critical with the Chargers (5-15, 2-10 GPAC) playing the Bulldogs tight over the contest’s final three quarters. Fortunately, Concordia still has the services of senior point guard Grace Barry, who helped her side build a 51-27 lead in the third quarter. Barry notched nine of her game high 18 points during that period. The Bulldogs enjoyed that large advantage thanks to a 24-4 run that began late in the first half and leaked into the second half.

Featuring a balanced attack of its own, Briar Cliff managed to chop its deficit down to 12 during the final quarter. The Chargers were plagued by their 30 turnovers and 3-for-19 shooting from 3-point range. Freshman guard Konnor Sudmann appears to have a bright future. She did not play in Seward in the season’s first meeting, but she put up 11 points and five steals this time around.

In place of Lammers, sophomore Elsie Aslesen made her first start of the season. She finished with five points and three rebounds. Olson got major contributions off the bench from MacKenzie Helman (14 points) and Claire Cornell (13 points and four steals). Cornell totaled 11 points in the opening half. Mackenzie Koepke and Riley Sibbel also added nine points apiece while Colby Duvel posted six points and three rebounds despite foul trouble.

Concordia will try to sharpen up before returning to Walz Arena. In Saturday’s game, it shot 36.8 percent (25-for-68) from the floor and committed 24 turnovers compared to 15 assists. Back on Nov. 16, the Bulldogs pummeled the Chargers by a 113-59 score. Concordia has won 10-straight meetings with Briar Cliff.

“Any road win in the conference is a good win, especially when Briar Cliff plays this well,” Olson said. “They did a great job fighting. We’ll take the win and go home.”

A hectic CIT week is up next. Before heading to River Forest, Ill., the Bulldogs will host seventh-ranked Morningside (16-4, 10-2 GPAC) at 6 p.m. CT on Wednesday. In the first meeting this season between the two sides, Concordia earned an 88-77 win over the Mustangs in Sioux City. The Bulldogs have won seven of the past eight series meetings.