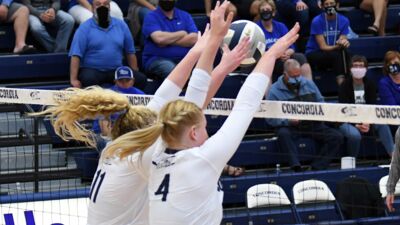 ORANGE CITY, Iowa – As evidence of the strength of the GPAC, the conference tournament semifinal round featured four teams all ranked in the top 12 of the latest NAIA coaches’ poll. On one side of the bracket, the 10th-ranked Concordia University Volleyball squad took on No. 5 Northwestern in a clash between combatants both capable of leaving their mark on the national stage. The Red Raiders owned a 15-7 advantage in blocking and won, 25-22, 25-22, 18-25, 25-23, inside the Bultman Center on Wednesday (April 7).

Head Coach Ben Boldt had hoped to lead the program back to the GPAC championship match for the first time since 2015. Northwestern (19-3) has been a difficult opponent for the Bulldogs (15-4) to deal with.

“I felt like we were figuring it out and learning. I thought we competed really well,” Boldt said. “Serve and pass-wise, it was almost dead even. We always talk about winning the serve and pass game. We competed really well from that perspective. When you have an error, it’s more about how you bounce back from it. There were a couple things they were able to execute with their middle attack that we couldn’t stop. We’re going to have to take a look at that and rep that out. It was pretty even across the board – could have made a couple more stops.”

Concordia had a chance in each of the three sets it lost. It very nearly forced a fifth set, having led 21-20 and later pulling even (23-23) before the Red Raiders collected points 24 and 25. Reigning NAIA National Player of the Year Anna Wedel blocked a Bulldog attack for match point. The result means that Northwestern will head to top-ranked Jamestown for the GPAC championship match on Saturday.

The middles were a big story in this contest. From a measure of efficiency, Concordia freshman middle blocker Gabby Nordaker enjoyed one of her finest outings of the season. She floored 12 kills on 19 swings (.526) and was credited with three block assists. On the outsides, Kara Stark (13) and Camryn Opfer (12) also reached double figures in the kill department.

The Red Raiders hit better than .350 in each of the sets they won (.370, .357, .359). As an outside, Wedel was kept contained to a degree (.095 hitting percentage; six errors), but middles Bekah Horstman (13 kills, seven blocks) and Emily Van Ginkel (11 kills, five blocks) sizzled. They both hit better than .450 while poking holes in the Bulldog defense. Star setter Lacey Reitz piled up 48 assists.

“They’re solid across the board,” Boldt said of Northwestern. “They set their middle a little bit more than what they probably normally want to, but when you’re passing the ball well you’re able to do that.”

Other leaders for Concordia on Wednesday included Tara Callahan in assists (40) and Marissa Hoerman in digs (17). Callahan also added 13 digs. An ace serve apiece was notched by Hoerman and Kennedy Vanscoy. The Bulldogs were outhit on the night, .259 to .188.

According to the NAIA website, the NAIA is scheduled to announce the volleyball national qualifiers via a live selection show at 10 a.m. CT on Monday (April 12). In the spring 2021 format, all 48 qualifiers will play in the opening round (at campus sites) on April 17. Action at the final site, the Tyson Events Center in Sioux City, Iowa, is slated to run from April 27 – May 1.