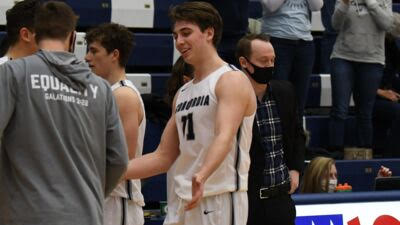 SEWARD, Neb. – This was The Gage Smith Game. The junior from Elizabeth, Colo., had himself a night to remember while spurring the Concordia University Men’s Basketball team to an 89-77 upset win over 16th-ranked Dakota Wesleyan University on Saturday (Feb. 6). Inside the friendly confines of Friedrich Arena, the Bulldogs shot 50.8 percent while moving to 9-1 at home this season.

This was a big one in terms of the hopes Head Coach Ben Limback’s squad has of earning a top four spot in the GPAC regular-season standings. Concordia now sits at 15-8 overall and at 12-6 in the GPAC (right behind DWU for fourth place in a tightly-bunched grouping).

“It was a fun game – lot of scoring in that first half,” Limback said. “Neither team was really able to put some consistent stops together. They’re really good on the interior. I thought (Ace) Zorr had a really good game. We had no answer for him. Certainly Gage Smith – what a night he had. He really got it going in the second half. He’s a special player and fun to watch.”

Smith got loose for 20 of his career high 32 points after halftime. An always energetic hustler, Smith has transformed his game by becoming a more well-rounded offensive threat. During a four-minute stretch early in the second half, Smith tickled the twine by knocking down four-straight 3-point attempts. Then in the final five minutes of the game, Smith helped put the finishing touches on the victory with a three-point play that pushed the lead to 14 (81-67) and moved him past the 30-point mark.

The 6-foot-6 junior finished with 32 points, nine rebounds, four assists, two steals and a blocked shot. Said Smith, “The first half I was attacking the rim and then they started backing off me a little bit. In the locker room, Coach kept insisting to shoot the three and look for the three. I had to listen to Coach and try to hit one. After that it felt really good.”

Zorr won’t forget this game either. He paced the Tigers with 30 points and 14 rebounds in a career performance of his own. It just wasn’t quite enough to keep up. Over the game’s final 15 minutes, Concordia’s lead never dipped below nine points. It ballooned as large as 17.

Things just clicked offensively for the Bulldogs, who were without starter Ryan Holt. The post tandem of Cory Davila (12 points on 5-for-5 shooting) and Klay Uher (six points on 3-for-4 shooting) did a number in the paint. Meanwhile, Carter Kent and Justin Wiersema knocked down a pair of treys apiece. Wiersema totaled 15 points, three assists and two steals while Kent chalked up 13 points, six assists and four steals.

“Once a guy plays with that kind of confidence it starts to snow ball,” Limback said. “Justin and Carter have been doing it too all year. To have what Gage did tonight, I thought our team fed off it. We forced them to change up their D at the end. I really like how we played defensively in the second half.”

Dakota Wesleyan (16-6, 12-5 GPAC) had started out 9-0 in conference play. Marquee players Koln Oppold and Nick Harden contributed 17 and 14 points, respectively. Four Tiger players logged more than 35 minutes of action. Back on Jan. 6, DWU defeated Concordia, 70-64, at the Corn Palace. This time around, the Bulldogs dictated the terms of the game.

In next week’s only outing, Concordia will welcome Hastings (6-17, 2-16 GPAC) to Seward for an 8 p.m. CT tipoff on Wednesday. In this season’s first matchup, the Bulldogs cruised to an 86-77 win at Hastings behind a career high 29 points from Wiersema. Concordia has had the Broncos’ number having won 10-straight series meetings.