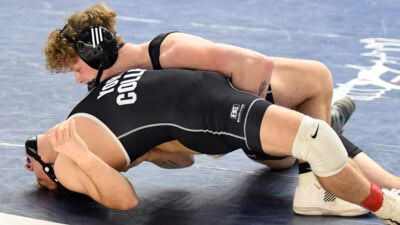 SEWARD, Neb. – On a night when the Concordia University Wrestling program honored its senior class, the Bulldogs got a glimpse at a future that appears to be promising. In Thursday (Feb. 4)’s dual inside Friedrich Arena, visiting York College dominated in the first half of its lineup while toppling Concordia, 28-14. The bright spots for the Bulldogs included an upset victory for freshman Jeaven Scdoris and a pin by freshman Jacob Telles to cap the evening.

Third-year Head Coach Levi Calhoun’s squad (5-11 overall) continues to battle injuries that have impacted the starting lineup. The program’s most accomplished senior (Gabe Crawford) was a scratch on Thursday. Despite some of the frustrations, Calhoun has seen growth.

“It’s been a year full of adversity, in a lot of different ways,” Calhoun said. “I’m just proud of how the guys stuck together. I’m happy with their effort. I’m kind of getting sick of saying it, but it is true. I’m never upset about their effort, we just have to get better at wrestling. We are young, but I don’t like to use that as a crutch. Our guys want to get better and they are getting better. I’m pretty impatient when it comes to that – I want to win.”

A state champion at Milford High School, Scdoris has the potential to put together a strong collegiate career. At 141 pounds, Scdoris faced off with Pierce Mederios, ranked 11th in the NAIA at 133. Scdoris went on the attack in a 15-9 decision in a match he nearly won by pin in the first period. There have been ups and downs for Scdoris (15-14), but Thursday’s performance showed what he is capable of.

Ranked 17th in the NAIA at heavyweight, Telles had no problem taking care of Jakavion Williams in the heavyweight bout. Telles picked up near-fall points in the opening period and then sealed the deal in the second while earning his 26th win and 12th pin of the season.

Sophomore Tavoris Smith stepped into Crawford’s spot in the lineup at 165 and held off Lennorise Echols by decision, 7-4. Smith notched one takedown in each period. Hopes of a comeback team victory were then kept alive at 174 when TJ Huber recorded two takedowns in the third period on his way to a 7-5 win over Derek Samudio. The Panthers proceeded to clinch the team victory via Jarvis Echols’ win at 184.

Three of Concordia’s four wins came from freshmen. Said Calhoun, “I think that speaks to the future of our team to have freshmen perform like that. The guy Jeaven wrestled is a very good wrestler – multiple-time national qualifier. To dominate a match like that is very impressive. Really happy with him and obviously Jacob’s had a great year. I’m super excited to continue to work with him and see how he continues to grow.”

A battle between nationally-ranked combatants took place 157, where No. 4 John Fox of York took a 5-1 decision over No. 20 Issiah Burks. The Panthers (8-3) dealt the Bulldogs crippling blows early in the dual by securing pins at 133 and 149 (following a Concordia forfeit at 125). Head Coach Chad Mattox’s squad has beaten Concordia twice this season, including the season opener at York.

Prior to the dual, the program acknowledged the contributions of a class of three seniors: Crawford (Virginia Beach, Va.), Cyrus Marshall (Columbus, Neb.) and Oscar Ramirez-Garcia (San Diego, Calif.). Ramirez-Garcia (184) was the lone senior to wrestle on Thursday.

The Sioux City Dave Edmonds Open on Saturday (9 a.m. CT) will be the final outing prior to the GPAC Championships on Feb. 19-20. Calhoun expects to take a small group to Sioux City, Iowa, this weekend.