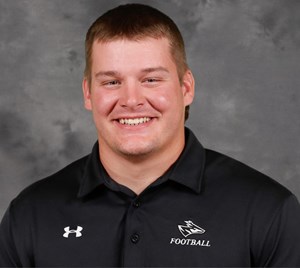 LOOMIS – Ty Spies was named the new head coach of the Loomis Wolves football program on Tuesday morning. Spies replaces Denis Reese, who was at the helm for nearly 40 seasons before retiring this past season.

Spies, originally from Mullen and a former member of the UNK football team, has been an assistant football coach and industrial arts teacher at Cambridge for the past two years. He will continue teaching industrial arts at Loomis.

Spies was a three-time All-MIAA selection while at UNK, while also collecting All-MIAA Academic Honor Roll and gathering over 60 tackles with 6 sacks after switching from Tight End to Defensive End. At Mullen, Spies was a first-team class D2 Defensive End with over 105 career tackles and 39 career receptions for 12 TDs. Spies was also a participant in the 2014 8-Man All-Star game in Hastings and selected for the Western Nebraska All-Star game.