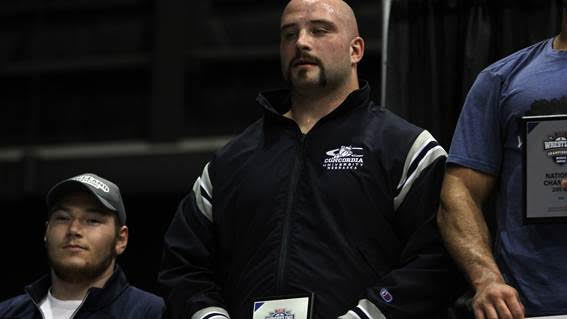 PARK CITY, Kan. – A few short months ago, the scene that played out on Saturday (March 7) night never would have crossed the minds of anyone associated with the Concordia University wrestling program. And yet, there was Tanner Farmer, former Cornhusker offensive lineman, taking the stage in an NAIA national championship match. Farmer ultimately finished as the heavyweight runner up as one of two Bulldog All-Americans on the weekend (March 6-7).

“We could have done better. We say that every time,” Calhoun said. “Mario (Ybarra) and (Chris) Kimball wrestled so hard in the blood round. That was a heartbreaker. That’s the toughest thing to take as a coach. Overall, the effort was there from every guy. That’s all I ever ask from them. I’m proud to be their coach. I love these guys.”

Considering Farmer’s lack of experience in collegiate wrestling, his run becomes all the more remarkable. The Highland, Ill., native won all three of his Friday matches (the last one by a narrow 2-1 decision) to put him in the semifinals. On Saturday morning, it took less than a minute for Farmer to pin sixth-ranked Justin Harbison of Providence (Mont.) with a spot in the finals on the line.

Then in the finals, the outcome required more than seven minutes. Farmer’s takedown in the third period gave him a one-point lead over top-ranked Brandon Reed of Lindsey Wilson (Ky.). A stalling call evened the score in the final seconds of the third period. Reed then took Farmer down for the win via sudden victory. It marked the end of Farmer’s journey. His record was a nearly impeccable 26-1.

“It’s an honor to be part of the Concordia wrestling program,” Farmer said. “Everything that the athletic program has done for me – I can’t thank them enough. I’m so grateful that I’ve had this opportunity … I just have to use this as an opportunity to learn and grow.”

Added Calhoun, “I’m forever grateful for what he’s done for our program. He has nothing to hang his head about. Anybody who watched that match saw he left it all out there.”

Despite wrestling only six matches this season prior to the start of the national championships, Garcia put things together at the right time to earn All-America honors for the second year in a row. A fourth-place finisher at 133 in 2019, Garcia’s 2020 tournament included wins over Midway (Ky.)’s Brent Newcomer (decision), Southeastern (Fla.)’s seventh-ranked Olson Delisca (decision) and Dickinson State (N.D.)’s second-ranked Gresh Jones (decision). Garcia then fell in the championship semifinals and consolation semifinals before earning the victory in the fifth-place match.

Calhoun’s squad qualified eight wrestlers for the 2020 national tournament. Both Mario Ybarra (125) and Chris Kimball (141) lost in the blood round on Friday, meaning they were one win short of earning All-America honors. Six of the Concordia qualifiers ended their careers this weekend, including three-time qualifier and two-time GPAC champion Deandre Chery.

Calhoun hopes to take the program up another notch following one of the most successful seasons in program history. “I feel really good,” Calhoun said. “We have a good staff. Coach Tyree Cox has been awesome and I’m excited to move forward with him and see where we can take this thing. We have amazing support from the Concordia family.”