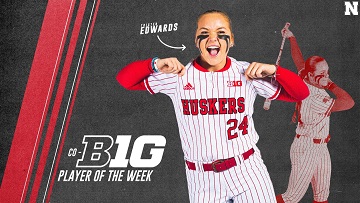 Edwards was spectacular at the ASU Invitational this past weekend. The outfielder went 8-for-16 (.500) and had an on-base percentage of .529 with one walk. She also finished with three doubles and three home runs to slug 1.250. Edwards was responsible for six of the team’s 14 RBIs and five of the team’s 14 runs. She had multiple hits in the first four games and reached base all five games to extend her on-base streak to 15 games.

Additionally, Edwards moved her way up the ranks on several Nebraska career charts. Her three homers brought her career total to 42, which ranks fifth in school history. Her six extra-base hits bring her career total to 85 which ranks fourth and her six RBIs bring her career total to 140, which ranks eighth. With 42 career doubles and 42 career homers, Edwards becomes just the third player in Nebraska history to have at least 40 career doubles and 40 career home runs, joining multi-All-Americans Taylor Edwards and Ali Viola. Finally, Edwards had two home runs against Oregon State, marking her school-record seventh career multi-home run game. She was previously tied for first with six.

Edwards and the Huskers have their home opener this weekend, hosting North Dakota and Northern Colorado. The Huskers will play each team once on both Saturday and Sunday for a total of four games