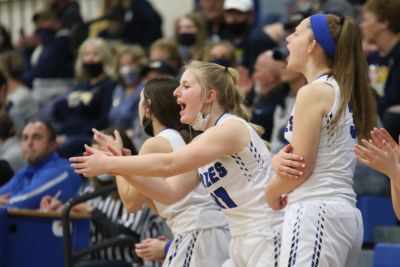 Overton-Overton improved to 15-3 on the season with a 46-28 win over Elm Creek. The Eagles jumped out to 9-2 lead and never trailed on senior night. Overton’s zone defense gave Elm Creek issues all night long as they led 23-13 at half and the Buffaloes could never mount a run in the second half. The Buffaloes were just 4-30 from three point range. Rachel Ecklund hit four threes and led the way with 14 points, while freshman Jolee Ryan had 13. Elm Creek which has now lost three in a row was led by Whitney Bauer who scored 18.

In the boys game, Elm Creek scored the first 25 points of the game and cruised in for a 71-24 win. The Buffaloes were led by Trey Miner who scored 20 in limited minutes. Elm Creek improves to 12-2 while Overton is now 2-15. The Eagles were paced by Caleb Svarvari who scored eight.