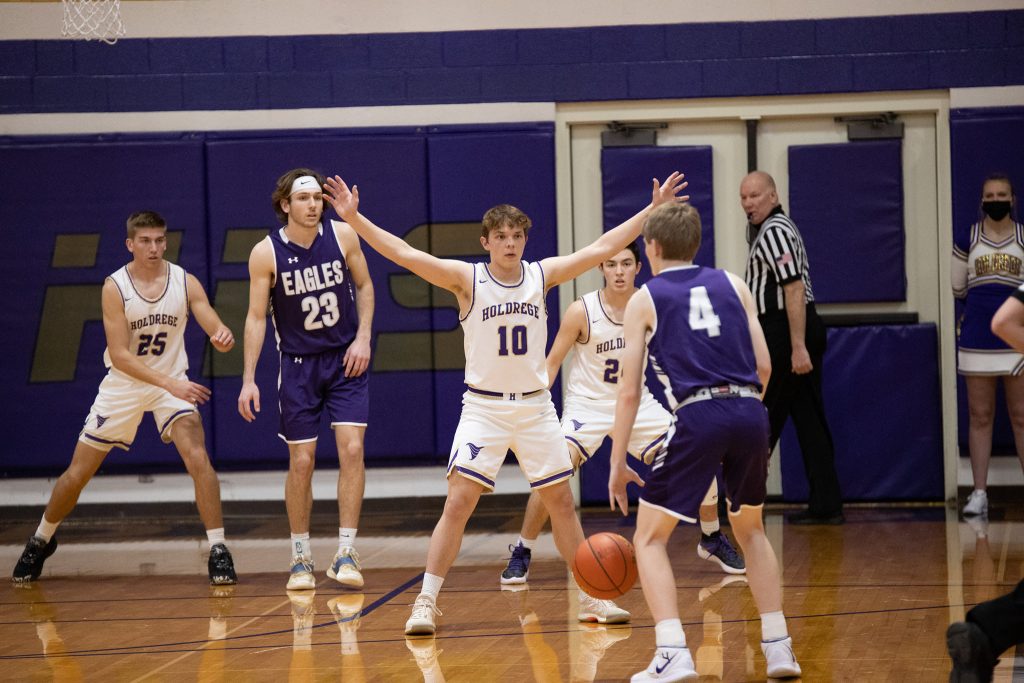 HOLDREGE – The Dusters fell behind early, trailed entering the fourth quarter, but continued to fight into overtime and eventually was heartbroken again falling at home to Southern Valley 68-62 in overtime. Click here to listen to the broadcast.

The Eagles started off quickly, as three pointers rained inside Holdrege High School. Freshman Kamden Bose and Senior Colton Burgeson hit three pointers to open the scoring, garnished by inside plays by Clayton Berry and the elder Carter Bose additionally making his presence felt with his own triple. Holdrege was in a hole early, down 14-7, but fought back with big plays hit on back-to-back possession three pointers from Dashton Edgren. The senior hit from the same spot in three different possessions from downtown, while Jaxson Karn, Adam Shearer, and Kaden Broeker added two points to battle within one possession. Carter Bose would have a three point play and Broeker added another lay-in to make the first quarter 20-18 as Southern Valley entered the second quarter with the lead.

Much of the same story continued for Southern Valley as they led and blew open their scoring with four more three pointers connected by Kamden Bose and Burgeson (one from Bose, three from Burgeson). Holdrege added another three from Edgren and Hudson Reed, while Kaden Broeker fought for inside drives for another 5 points in the quarter. Southern Valley had simply too much to handle; as the outside shots rang home Clayton Berry found 7 points in the paint extending the lead for the Eagles 41-29 as Southern Valley outpaced Holdrege 21-11 in the quarter.

With the lead heading out of the halftime locker room, the Eagles clamped down on Edgren’s hot start but allowed Holdrege to reserve energy into the final quarter as the third was paced by a first possession triple from Edgren, two points for Broeker, and a three point play by Jackson Hinrichs. Southern Valley had another three pointer from Burgeson, but was outscored by Holdrege 12-9 in the quarter. However, the Eagles held the lead entering the final quarter up 50-41.

It was a rush by Holdrege offensively, mixed with Southern Valley errors, that led to the Dusters extending the run time of the contest. Outscoring Southern Valley 17-8 in the final 8 minutes, Dashton Edgren fought for a three pointer and added another six points after that. A fast paced quarter also saw Southern Valley mistakes pile up: from turnovers and missed passes, to stepping out of bounds on an inbounds, Holdrege remained within one possession with less than a minute to go. On a drive inside, Broeker found a crease along the post and scooped two points to tie the game at 58 all. Southern Valley was unable to get a shot off before the buzzer, heading into overtime.

In added time, the Eagles mustered a three point dagger from Kamden Bose, breaking the hearts of Holdrege faithful as the Dusters were unable to overcome the big shot and never got back within one possession, having to foul to end the contest and the Eagles knocking down free throws to win 68-62.

Holdrege falls to 1-9 on the season and returns to home Saturday with a tough draw against Hershey. The Dusters saw contributions from Edgren with 24 points, Broeker with 17 points, 10 points from Hinrichs, 6 points by Jaxson Karn, 3 added by Hudson Reed, and 2 points by Shearer.