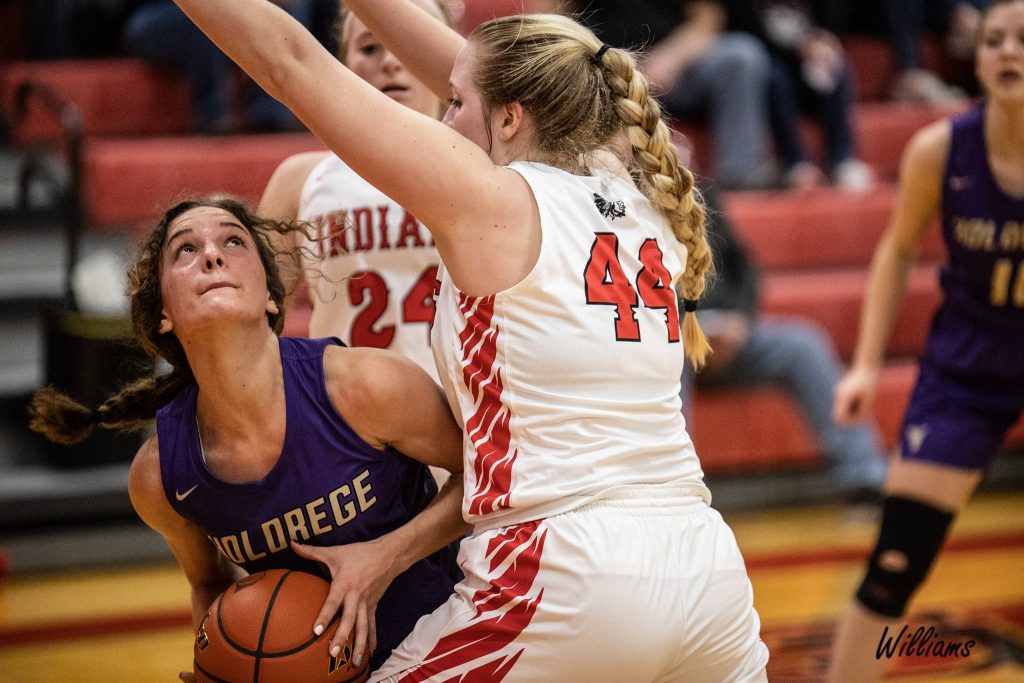 BROKEN BOW – The Holdrege Dusters Girls pushed the undefeated Broken Bow Lady Indians to the brink, but couldn’t get offensive consistency going in the second as they fall on the road 30-18 Friday night. Click here to listen to the broadcast.

Broken Bow came into the game as one of the highest rated Class C1 teams at 10-0 and sitting #3 in power points, and showed that early as Kali Staples hit a free throw and back-to-back three pointers to start the contest. Holdrege shored up defensively, only allowing three more points in the quarter but were held scoreless until around the two minute mark when Taylor Wiser was able to drop two points followed by McKenna Ortgiesen’s lay-in leading to Broken Bow’s 10-4 first quarter lead.

The Dusters defense began terrorizing the guards of Broken Bow, and limited them to only three points the entire second quarter. For eight minutes, Alexis Bliven and Avery Hurlbert attacked the lethal shooters of the Indians, never allowing them to get comfortable or into a rhythm. Additionally, Holdrege continued to play a clean game as the Dusters only collected a few fouls while key players for Broken Bow, namely Staples and post Kassidy Cyboron, quickly received fouls.

The defensive onslaught also brought some more offensive opportunities, as Bliven was able to take some steals for attacks at the basket and added 4 points in the second quarter. She was the only Duster to score in the quarter, while Emma Schall for Broken Bow gathered an offensive rebound for an extra attempt to put in 2 points along with a free throw connected by Kailyn Scott. Broken Bow entered halftime leading 13-8.

Entering the second half, Dusters head coach Derek Runcie made an effort to continue the defensive pressure, and his team continued to attack. Broken Bow however quickly added a three pointer from Staples, but she was forced to sit the rest of the third quarter after picking up her third foul in the opening minutes of the second quarter. Cyboron also found a crease along the basket adding a lay-in, while Holdrege’s Megan Belgum was able to bring in 4 points herself. Bliven added another transition bucket off a steal, and Mallory Pfeifer added a jumper, but even with the added scoring Broken Bow still maintained their four point lead 20-16 entering the final quarter.

The Indians added 10 points in the final eight minutes, but shut down Holdrege in the fourth quarter as Bliven was the only scorer to connect from the free throw line with 2 points. Broken Bow’s defense took over, suffocating inside lanes and not allowing a shot to fall, and the Indians closed out their win at home earning a 30-18 win.

Broken Bow remains undefeated by only scoring 30 points as a unit, their lowest offensive output on the season. Earning their 11th win, the Indians saw contributions from Staples with 12 points, 5 points from Kailyn and Kya Scott each, 4 points from Schall, and 2 points added a piece by Cyboron and Halle McCaslin. The Indians host the Girls Basketball Showcase Saturday and will face off against C1 opponent Oakland-Craig.

The Dusters fall to 4-4 on the season, and saw contributions from: Bliven added 8 points, Belgum tallied 4 points, and 2 points scored each by Pfeifer, Ortgiesen, and Wiser. Holdrege will travel to Gibbon on Saturday.