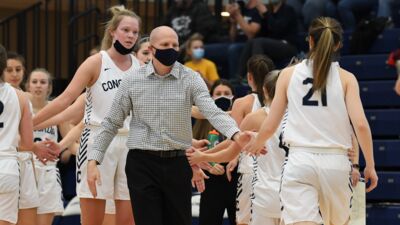 SEWARD, Neb. – For the most part, Saturday (Feb. 20)’s regular season finale went as scripted for the 22nd-ranked Concordia University Women’s Basketball team. The Bulldogs overwhelmed visiting Doane with their athleticism, forced 32 turnovers and rolled to a 98-57 win inside Friedrich Arena. A 33-point first quarter outburst by Concordia set the tone for another rough series meeting for the Tigers.

Fifteenth-year Head Coach Drew Olson’s has concluded the regular season at 18-7 overall and at 17-5 within the GPAC. The Bulldogs finished alone in second place in the conference standings. They have won each of the past 10 meetings over Doane.

“I thought it was a good game for us. We hadn’t played in a long time so just to get a game in felt good,” Olson said. “I felt like the start of that third quarter we were not very good. It was nice to see our team fight. We needed to have those competitive juices come out and I think we’ll be ready for the conference tournament now.”

Yes, there was a hiccup to begin the third quarter when Doane went on a 14-4 run. However, Concordia turned on the jets and allowed for the entire roster to see extensive action. Junior Mackenzie Koepke enjoyed perhaps her best offensive outing of the season while pouring in a game high 17 points on the strength of 4-of-7 shooting from beyond the arc. She was joined in double figures by Taylor Cockerill (12) and Averie Lambrecht (11).

A sophomore from Waverly, Neb., Lambrecht supplies energy off the bench. She helped provide a spark during that lull to open up the second half.

“We kind of came out in the third quarter and slacked off,” Lambrecht said. “We weren’t as focused and that was something we were very concerned about in this game – being focused and mature. We needed more intensity and more energy. We made big plays in our press and racked up the points again.”

For their 13th GPAC tournament game in a row, the Bulldogs will be at home while holding down the league’s No. 2 seed. Concordia will host No. 7 seed Dakota Wesleyan (14-10, 12-10 GPAC) at 7 p.m. CT on Wednesday, Feb. 24 in the quarterfinals of the postseason tournament. During the regular season, the two sides split with the home team getting the upper hand in both instances.

Said Olson, “It’s going to be a tough game. They’re a really tough team and they execute well. Monday through Tuesday is all going to be preparing for them.”