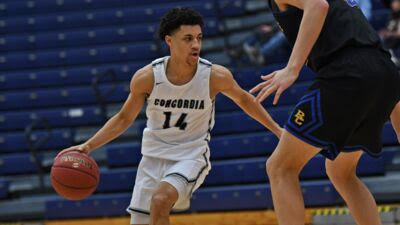 SEWARD, Neb. – In a complete reversal of the first matchup between the same two sides, the Concordia University Men’s Basketball team rocked Briar Cliff’s world. The 3-point reliant Chargers went just 6-for-29 from long range and watched as Carter Kent ran wild on the other end. It all added up to an 81-58 home victory for the Bulldogs on Saturday (Jan. 23). They had been off since last Saturday’s loss to No. 15 Morningside.

This looked a lot like many home outings this season for Head Coach Ben Limback’s squad, which is 8-1 when playing inside Friedrich Arena. Concordia now stands at 14-7 overall (11-5 GPAC).

“I told the guys after the game I was really proud of our offense, but defensively I thought we were really good today,” Limback said. “We guarded and gave great effort. You have to be disciplined with these guys. They shoot a lot of threes. When you start flying around and over-helping it can make things a lot worse. I thought our guys were disciplined and locked in on key shooters.”

In their 89-75 loss at Briar Cliff on Dec. 5, the Bulldogs surrendered seven treys to Conner Groves. He ‘attempted’ only two 3-point shots on Saturday in a contest controlled by Concordia. Open looks were much harder to come by for the Chargers (11-10, 8-8 GPAC), who placed just one starter (Jade Kleinhesselink with 10) in double figures. The visitors shot 33.9 percent (21-for-62) for the game.

Considering those defensive results, the Bulldogs had plenty of firepower. Kent poured in a game high 24 points on 9-for-14 shooting (6-for-8 from long distance). It marked the 12th game of 20 or more points in the career of Kent. Three teammates scored in double figures: Gage Smith (17), Justin Wiersema (13) and AJ Watson (12). Smith pulled down 10 rebounds for his eighth double-double this season.

But this was about defense. Said Watson, “The first half of the last game (versus Briar Cliff) they hit 10 threes on us. Our main focus was to keep a high hand and take away their vision from the basket so they couldn’t get wide open threes like they did last time. I think we executed that really well.”

Concordia earned its first double-digit advantage less than five minutes after tipoff. Briar Cliff did manage to fight back with four (25-21) in the latter part of the first half, but the Bulldogs built the lead back to 12 with the help of a trey from Jackson Hirschfeld before the halftime buzzer. Midway through the second half, Concordia has gained a 20-point lead as Kent ruthlessly attacked the opposition.

Kent also contributed seven rebounds to a 39-29 team advantage on the boards. In addition, Ryan Holt grabbed seven rebounds and blocked two shots while Wiersema dished out four assists. The energetic Watson added three assists of his own and was complimented by Limback for his play on both ends. The Bulldogs shot 55.0 percent (33-for-60) for the game.

Said Limback of the defensive performance, “We wanted to contest everything at the rim. I thought our bigs – Ryan and Klay (Uher) – did a good job of that. Against a team that shoots threes, I felt like our guys were more disciplined today. Outstanding defensive effort.”

The Bulldogs will wait until the calendar flips to February before returning to action. With the 2021 Concordia Invitational Tournament wiped out, Limback’s crew will have all of next week off while looking forward to its matchup at Dordt (15-6, 10-6 GPAC) on Wednesday, Feb. 3. That contest will mark the final road game of the regular season.