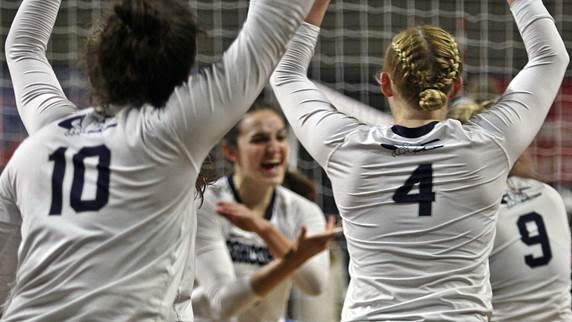 CRETE, Neb. – The makeup of the schedule hasn’t necessarily allowed for a natural rhythm to open up the 2020 season, but the Concordia University Volleyball Team has not been phased. The Bulldogs smoldered to the tune of a .424 hitting percentage on Wednesday (Sept. 16) and walloped host Doane, 25-16, 25-16, 25-14, in Crete, Neb. Five Bulldogs had seven kills or more in another dominant performance.

Third-year Head Coach Ben Boldt’s squad has twice ventured into hostile GPAC territory without even a scratch, at least in terms of winning every set. Concordia (2-0) also won in straight sets at Midland a week ago.

“Again we were anxious to get out there and thankful for the opportunity to get out there,” Boldt said on the 104.9 Max Country postgame show. “We were hoping that we would stay focused from the service line. You think about the things we need to continue to work on and I think that’s one of the bigger ones, but it was nice to see us stay resilient and finish that one out.”

Boldt may still be asking for more consistency from the service line, but the statistics on Wednesday told the tale of a blowout. The Bulldogs out-numbered the Tigers in kills, 47-27. Doane really had no answer for the Concordia attack, which put forth respective hitting percentages by set of .290, .633 and .355. Setter Tara Callahan (37 assists) made use of the team’s many weapons.

Freshman Gabi Nordaker continues to be a fun player to watch. She pounded 10 kills on 18 swings (one error). Nordaker was followed in the kill department by teammates Arleigh Costello (nine), Kara Stark (nine), Kalee Wiltfong (nine) and Camryn Opfer (seven). Each of them hit .312 or better as part of the onslaught. Costello and Wiltfong also got in on three blocks apiece. In the back row, Marissa Hoerman posted 13 digs. Multiple aces were recorded by Erin Johnson (three), Hoerman (two) and Tristin Mason (two).

The Bulldogs played at such a level that they did not have to face a whole lot of adversity on this particular night. Doane did manage to lead the third set, 4-2, before Concordia took control. Tiger leading attacker Kennedy Scheele topped her squad with seven kills (six errors and 28 total attempts). Doane (3-2, 1-2 GPAC) has dropped back-to-back matches within the conference having also lost to College of Saint Mary over the weekend.

Boldt liked the way his team closed this one out in much sharper fashion than it finished the third set last week at Midland. Said Boldt, “Part of being resilient for us is finishing matches. We did better this time than we did in our last match. It’s a process. We need to get back at it. We’re looking forward to another opportunity on Saturday.”

The victory marked the fifth in a row in the series versus Doane. The Bulldogs won each of last season’s three meetings. The Tigers have a first-year head coach in Jenna Jones, previously an assistant at Nebraska Wesleyan.

At long last, the Bulldogs will host their home opener this Saturday when Hastings (3-1, 2-0 GPAC) pays a visit to Walz Arena. First serve is set for 3 p.m. CT (junior varsity at 1:30). Concordia and Hastings split their two meetings last season with the home team prevailing in both instances.