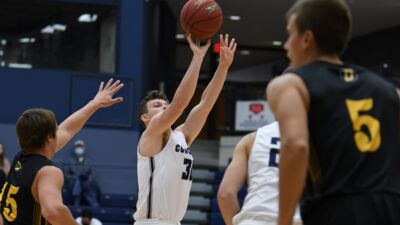 SIOUX CITY, Iowa – A key matchup of top-of-the-league contenders featured the defending GPAC tournament champion Bulldogs against the defending GPAC regular season champion Mustangs. Unfortunately for the Concordia University Men’s Basketball team, it struggled offensively in the first half and then allowed seventh-ranked Morningside to run away with it in the second half. The result was a Mustangs win, 86-64, in Sioux City, Iowa, on Saturday (Dec. 12).

Head Coach Ben Limback’s program has been unable to solve Morningside, which has won 10-straight series meetings. The Bulldogs dropped to 9-3 overall and to 6-2 in the GPAC.

“We needed to take care of the basketball and not give them a lot of transition situations,” Limback said. “We gave them some very easy points early and after that they got in a rhythm. It wasn’t just one guy that was hurting us. We knew the big guy (Trey Brown) was going to be a problem, but they just kept getting into the lane and getting layups. I thought we settled in midway through the first half, but I didn’t feel like offensively the ball was moving very sharply. They were the tougher team today.”

This was a flex-the-muscles type of triumph for the Mustangs (10-1, 6-1 GPAC), who remain a factor in the GPAC championship race. A rash of turnovers out of the gates played a role in Morningside mounting a double-digit lead less than eight minutes into the contest. A nine-point spread (34-25) at the half ballooned to 24 in a dominant closing 20 minutes. The shooting percentages paint a picture of a lopsided game – the Mustangs shot 58.1 percent (36-for-62) compared to 43.6 percent (24-for-55) shooting by Concordia.

A good portion of the scoring for the Bulldogs came from two players. Carter Kent poured in 18 points (6-for-14 from the field) while Justin Wiersema put up 16 points and eight rebounds. Kent’s offensive production in the second half (13 points) served as a bright spot. Three players off the bench collected either six or seven points: Noah Schutte (seven), AJ Watson (six) and Thomas Young (six).

For Morningside, Brown has established himself as one of the league’s best frontcourt players. He posted 18 points and seven rebounds. Three other Mustangs hit double figures in scoring: Zach Imig (11), Will Pottebaum (10) and Aidan Vanderloo (10). Imig led all players with seven assists. Morningside enjoyed advantages of plus-nine in rebounding and plus-four in turnovers.

“We weren’t very tough tonight,” Limback said. “Mentally and physically, I don’t think we executed very well. We talked about how to handle adversity and how you handle these moments on the road. We have two very important games on the road next week. We’re going to have to be a lot tougher.”

After leaving Wednesday’s win over Mount Marty early, junior rebound extraordinaire Gage Smith returned to the starting lineup on Saturday. He grabbed five boards in 14 minutes of action. Concordia is 8-2 over its last 10 games with both losses coming in Sioux City.

The pre-Christmas road swing will continue on Tuesday with a visit to Midland (3-8, 1-7 GPAC) for an 8 p.m. CT tipoff in Fremont, Neb. The Bulldogs will aim for a regular-season sweep of the Warriors, an opponent they defeated by an 82-55 score in Seward on Nov. 10. Midland’s lone GPAC win came at over Hastings.