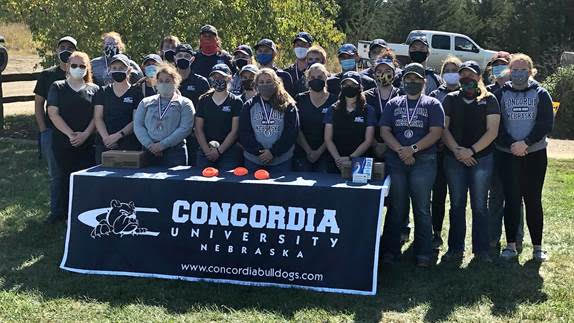 BRAINARD, Neb. – For the fifth year in a row, the Concordia University Shooting Sports program put on the Concordia Bulldog Sporting Invitational. The 2020 edition of the invite took place this past weekend (Oct. 3-4) at Oak Creek Sporting Club in Brainard, Neb., and featured nearly 100 collegiate shooters from seven different institutions. The Bulldogs placed second behind rival Midland by hitting 1,316 targets.

Head Coach Scott Moniot’s squad has enjoyed a budding rivalry with Midland. A week earlier Concordia beat out the Warriors for the Prairie Circuit Classic conference championship. Midland won this time around with a total of 1,355.

“Midland and Fort Hays State (University) have been dominant forces in division 2 (breakdown at the ACUI national championships) for the last eight-to-10 years,” Moniot said. “Anytime you get a chance to go up against one of them you know it’s going to be a tough battle. Between us and Midland you’re talking about two teams that could be duking it out for a national championship. It’s fun to go head-to-head. There’s nothing wrong with that kind of rivalry and that kind of competition. It shows us where we can expect to be.”

Several individuals contributed to the second-place team finish while competing in the disciplines of super sporting and sporting clays. Bulldog junior Colten Uitermarkt topped all shooters at the event with a high overall (HOA) total of 276. When factoring in females only, Concordia’s Monica Dale (253), Sarah Schwacher (251) and Nicole Breese (249) went 1-2-3 atop the overall leaderboard.

Uitermarkt placed second HOA among Bulldogs at the conference championships. He continues to raise his game. Said Moniot, “Colten started hitting his stride towards the end of last season. He threw up a couple 100s last year – one in skeet and one in trap. He’s really putting his game together. It’s pretty exciting to see how much growth he’s had in this past year. He’s taken the game from checkers to chess and he’s starting to master the game.”

Moniot also gives credit to Dave Miller for enhancing the level of his team. The Guinness World Record holder for most sporting clay targets shot in one hour, Miller (more than 20 years of experience in competitive shooting) provided the team instruction early in the fall semester. It’s made a big difference, particularly in the discipline of sporting clays (which used to be a weakness).

Concordia will finish the fall portion of its schedule this Saturday and Sunday with the Hastings Bronco Invitational in Grand Island, Neb. Action is slated to begin at 9 a.m. CT both days. The next event following this weekend will be the Missouri Tundra Shootout in Columbia, Mo., slated for Feb. 20-21.