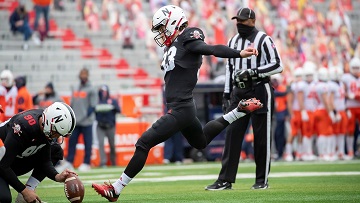 Nebraska place-kicker Connor Culp was recognized as the Big Ten’s top kicker on Thursday, being named the Bakken-Andersen Kicker of the Year. Culp is in his first year with the Huskers, and was also a first-team All-Big Ten selection by both the league coaches and media panel.

A native of Phoenix, Ariz., Culp has connected on 13-of-15 field goals this season, including a streak of nine consecutive field goals made over a five-game stretch. Culp is also perfect on 16 PAT attempts this season. He leads the Big Ten and ranks fifth nationally in field goals per game at 1.9 per contest. Culp also ranks second in the Big Ten in field goal accuracy at 86.7 percent.

Culp’s season was highlighted by two games with 3-of-3 field goal efforts in victories over Penn State and Purdue. Against the Boilermakers, Culp connected on a career-long 49-yard field goal, the longest by a Husker since 2016. Culp also handles kickoff duties for the Huskers. Culp joined the Husker program as a graduate transfer after spending his first four years at LSU, where he made 11-of-16 field goals.

The Big Ten’s top kicking honor is named for Wisconsin place-kicker Jim Bakken and Michigan State place-kicker Morten Andersen. This marks the third time a Nebraska kicker has won the award, with Culp joining two-time winner Brett Maher (2011, 2012).  It is the first time a Nebraska player has won any of the Big Ten’s major awards since Sam Foltz was the Punter of the Year in 2015.

Culp is one of 11 Huskers to earn All-Big Ten recognition. Second-team selection Cam Taylor-Britt led seven Blackshirt defenders recognized on Wednesday, while a trio of offensive players were honored on Tuesday.

In addition to Culp’s honor on Thursday, senior linebacker Collin Miller was recognized as the Huskers’ Sportsmanship Award nominee for the 2020 season.