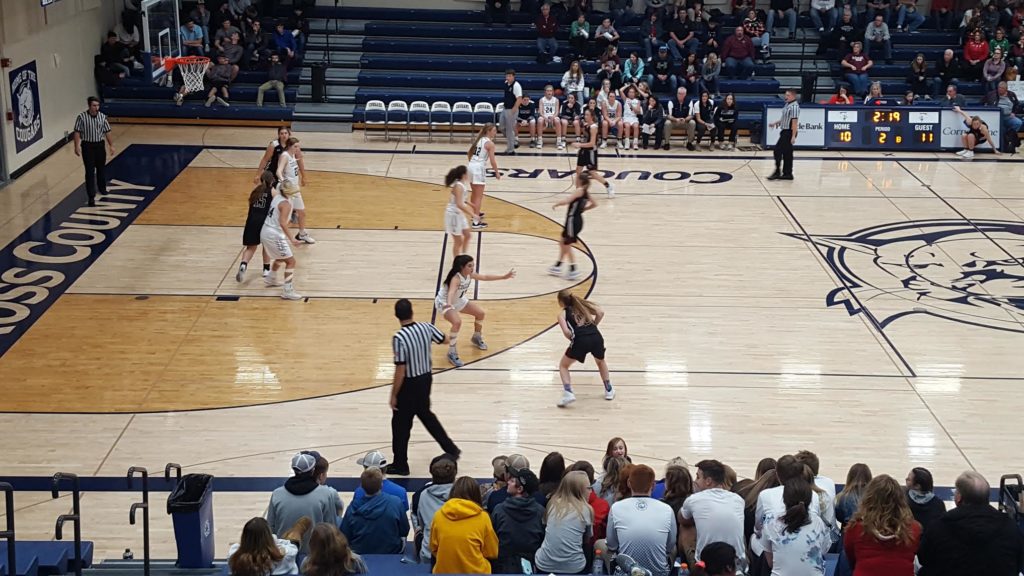 STROMSBURG- In girls’ high school hoops Friday night, Cross County knocked off visiting BDS 39-31 in a scrappy, blue-collar game. It was rough and tumble early, as both teams were very aggressive. BDS had the upper hand at the start and led 7-4 after a quarter. Cross County evened things up by halftime, with the score knotted up at 14-14. The Cougars, broke the game open with a 13-0 run to end the 3rd period, extending that run to 17-0 early in the final quarter, leading by as many as 15. The Lady Eagles made a bit of a run late in the game, but it wasn’t enough as the Cougars won 39-31. Junior Erica Stratman led CC with 13 points, while sophomore Josie Noble and senior Avery Hanson added 9 apiece for Cross County, now 4-1 on the year. Senior Riley Haecker led BDS, now 4-2, with 11 points.

In boys action, it was all Cross County, as the Cougars steamrolled to a 50-27 victory over the Eagles. CC’s defense was smothering all night, and the Cougars were never threatened in the contest, jumping out to an 18-5 first-quarter advantage. The lead was extended to 33-16 by halftime. The second half was more of the same, as Cross County continued the impressive defensive play, holding BDS to just 11 points after the break, and cruising to the big win at home. Cross County, 3-2, was led by Junior Christian Rystrom’s 14 points. Sophomore Cory Hollinger scored 12, and senior Cale Lundstrom added 11. BDS, 4-2, was paced by Senior Eric Schroeder’s 10 points.
© 2020 Nebraska Rural Radio Association. All rights reserved. Republishing, rebroadcasting, rewriting, redistributing prohibited. Copyright Information
Share: