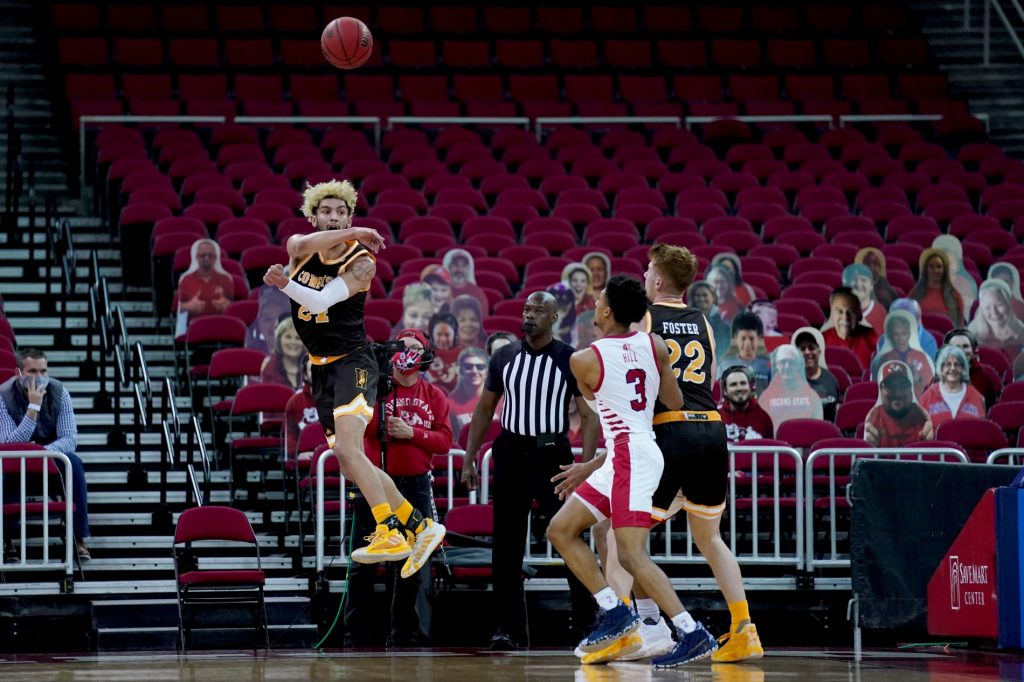 FRESNO, Calif. (Jan. 2, 2021) – The Wyoming Cowboys won their sixth-straight game downing Fresno State 78-74 on Saturday evening in the Mountain West opener in the Save Mart Center in Fresno, Calif. Junior Hunter Thompson tied a career-high with seven three pointers, as Wyoming improves to 7-1 overall and 1-0 in conference play.

The six-game winning streak for the Pokes is the most since recording seven during the 2016-17 season. It also marked the first time Wyoming has won its road opener in the Mountain West since the 2014-15 season. Wyoming has won three-straight road games for the most since the 2017-18 season. Wyoming head coach Jeff Linder is also the first head coach in Wyoming history to win his first three road contests.

“This has always been a tough place to play in the Mountain West,” Linder said. “I talked to our guys about how we haven’t played in 15 days and we had some rust and were out of rhythm offensively. We weather the storm in the first half and in the second half we had a great grit and toughness.”

“Jeremiah Oden did a great job in the post and made big plays offensively,” Linder said. “He works so hard and he picked his spots and it was great to see him rewarded.”

“We talk about winning plays and we have to be the team that makes those,” Linder said. “Our guards did a better job in the second half of finding open shooters and Thompson made them play. You have to win road games to be a great team in this conference and tonight was a great step.”

The Pokes opened the scoring with a pair of three pointers for a 6-0 two and a half minutes into the contest. The Bulldogs went on a 7-2 run to make it an 8-7 contest with 15:03 left in the first half. Fresno State’s Orlando Robinson led the offensive stretch.

After a Thompson three-pointer, the Cowboys went scoreless for nearly three minutes, as the Bulldogs tied the contest, but the drought was end by a layup from Marcus Williams with 11:06 left in the half. Fresno State continued to have the hot hand taking their first lead at 17-15 with 9:23 left in the frame making four-straight shots.

Foster gave the Pokes a 23-22 lead with a three-pointer with 6:26 left in the half, but Robinson added another layup to get to double-figures to take the lead back seconds later. The Pokes would then go scoreless for over three-minutes, as Fresno State built a 26-23 lead with under four minutes left in the second stanza.

After the Bulldogs built a 31-26 advantage, freshman Xavier DuSell added a three-pointer and Maldonado added a pair of freebies to tie the game. Fresno State would add a late bucket and took a 33-31 lead into the half.

Both teams got off to a fast start to open the second half, but the Bulldogs hit 4-of-5 field goals and went on a 6-0 run to take a 42-35 lead. As Wyoming had five turnovers in the first four minutes of the half.

Thompson would hit back-to-back three pointers to make it a 42-41 game for Fresno State with 14:40 left in the game, as they were his fourth and fifth threes of the game. He added his three to give the Pokes the 44-42 lead with 12:50 left in the contest.

The Pokes would build the lead to 48-44, but back-to-back layups from the Bulldogs tied the game at 48-48 halfway through the half. Fresno State took a brief 51-50 lead, but five-straight points from freshman Jeremiah Oden made it a 55-51 game with eight minutes remaining.

Wyoming would hold that four-point lead, but Deon Stroud used and an-one play and Fresno State added two technical free throws to make it a 61-58 game in favor of the Bulldogs. It was a part of an 8-0 run.

After Fresno State took a brief one-point lead Thompson added a rare four-point play to give Wyoming a 71-68 lead with 1:59 left in the game. Fresno State would use the free throw line for four-straight points to take a 72-71 lead with 1:32 left.

Fresno State took a 74-73 lead after a block and fast break layup by Isiah Hill with 43 seconds remaining in the game. Sophomore Kwane Marble II hit a pair of free throws with 37 seconds left to make it a 75-74 game for the Pokes. He would build the lead to three points 17 seconds later and Williams added an insurance freebie for the 78-74 win.

The Bulldogs were led by Stroud with 19 points and Hill with 17 points. Robinson added 15 points and five rebounds.

Wyoming returns to action on Monday facing the Bulldogs once again inside the Save Mart Center for a 7 p.m. MT start.