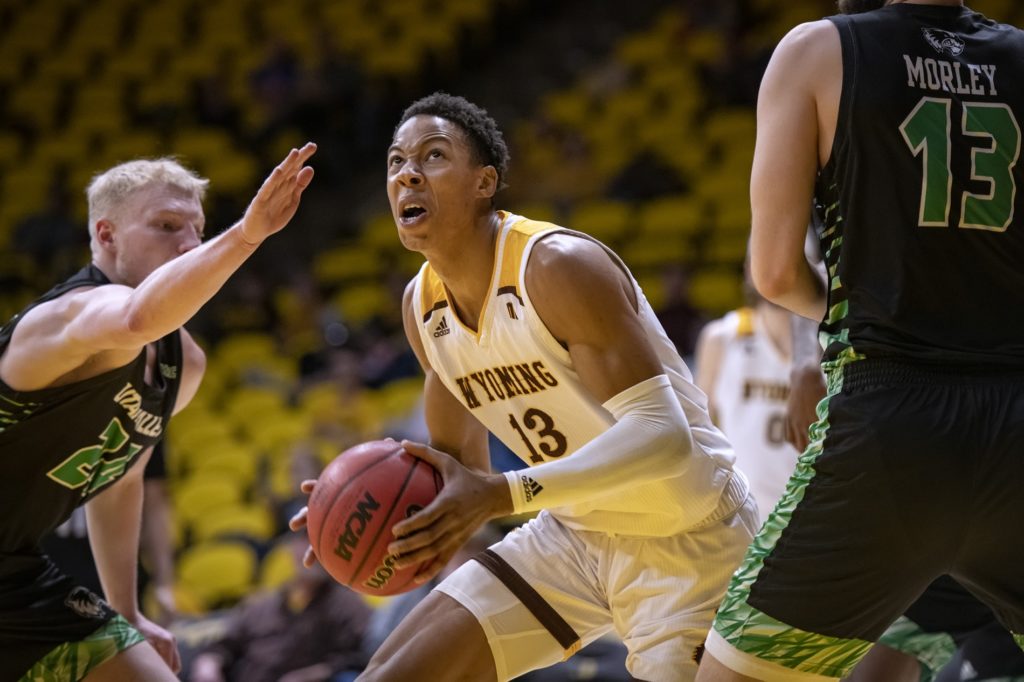 LARAMIE, Wyo. (Dec. 18, 2019) – The Cowboys erased an eight-point deficit in the second half, but a late miscue by the Cowboys proved costly in a 68-67 loss to Utah Valley on Wednesday evening in the Arena-Auditorium in Laramie. Wyoming’s bench added a season-high 19 points in the contest.

“I thought we got in an offensive battle tonight,” UW head coach Allen Edwards. “I did like the fight we had to get back in the game, but we need to stop fighting to get back into the game. We did a great job rebounding and taking care of the basketball. We will continue to work and stick together. We had opportunities to win the game tonight. We hurt ourselves tonight by putting them at the free throw line.”

Redshirt sophomore Hunter Maldonado led Wyoming with 23 points to lead all scorers. It was his third 20-plus scoring game of the season, as he has scored in double-figures in 18 of his last 20 games. He also added six rebounds and four assists. Sophomore Hunter Thompson added 17 points and a team-high seven rebounds. Sophomore Brandon Porter recorded a career-high 12 points for the Pokes. He was 5-of-6 from the field.

“I thought we had some simple fouls tonight in the sense of reaching and you can’t play defense when the opponent is shooting from the free throw line,” Edwards said.

The Pokes and Wolverines battled to a 5-5 tie in the first five minutes. Thompson led the way for the Pokes with all five points. He gave Wyoming their first lead of the game at 8-5 with a three-pointer with 13:13 left in the first half.

The Pokes fueled by five points from Brandon Porter maintained their lead at 16-15 with under nine minutes left in the frame. But a 5-0 run by the Wolverines gave them a 20-16 advantage 90 seconds later.

Wyoming would go scoreless over the final three minutes until Senior A.J. Banks hit a three-pointer at the buzzer to make it a 31-26 advantage for Utah Valley at the half. Isiah White led UVU with 13 points in the first half.

The Wolverines pushed their lead to as much as eight points at 36-28 in the opening minutes of the second frame, but a 5-0 run from the Pokes made it a 36-33 game with 17:18 left in the game. The Pokes would pull within on numerous occasions until a 4-0 run by UVU made it a 47-42 game with just under 10 minutes left.

Wyoming went on a quick 6-0 run to make it a 53-51 contest with 6:33 left. Maldonado added an and-one play and Banks added his second triple of the game during the run. The Pokes took the lead at 56-55 on a three pointer from Porter with 5:29 left.

The Wolverines used free throws to take a one point lead at 59-58 with under four minutes, but a bucket by Porter and a pair of freebies from Maldonado made it a 62-59 game with three minutes left, but it would come to a 63-63 stalemate with two minutes left.

The contest was tied at 67-67 until a miscue on a pass from Maldonado to Thompson led to a layup from White with seven seconds left that proved to be the game winner, as a desperation shot by Wyoming came up short.

White led Utah Valley with 19 points off the bench. He also led all players with nine rebounds for the night.

The Cowboys return to action on Saturday heading to Denver to take on the Pioneers at 1 p.m. in a contest on Altitude Sports.