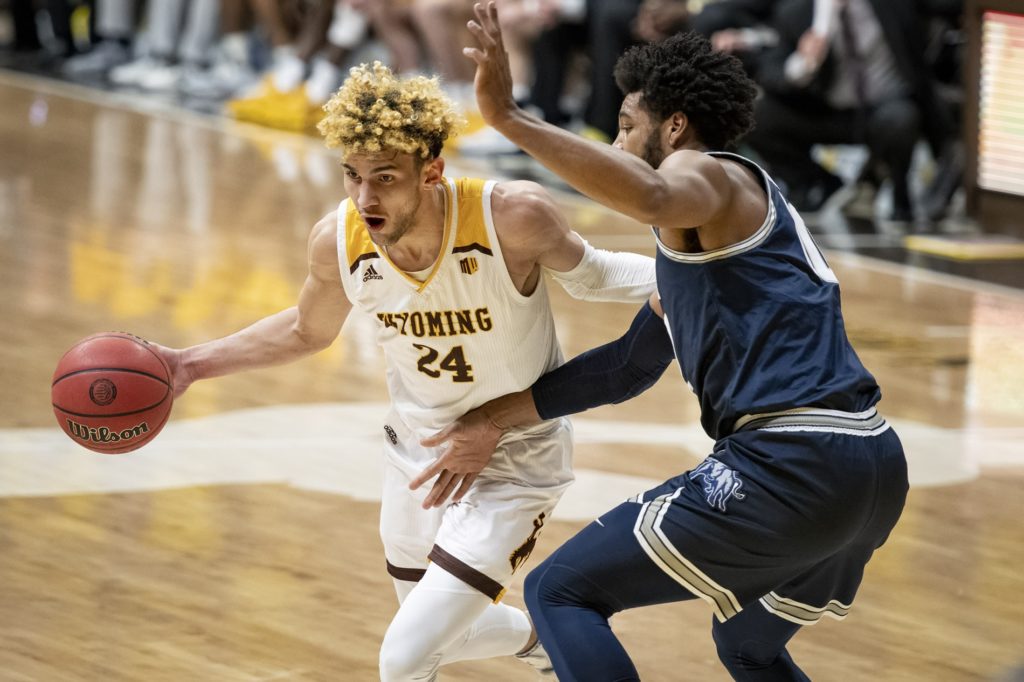 LARAMIE, Wyo. (Jan. 28, 2020) –Despite holding Utah State to a season-low 25 points in the first half, the Wyoming Cowboys struggled from the field in a 68-45 loss to Utah State on Tuesday evening in the Arena-Auditorium in Laramie. The defending Mountain West Champions shot 53 percent from the field in the second frame on their way to the victory.

“I thought we played some good basketball in the first half defensively,” UW head coach Allen Edwards.  “We held them to 38 percent shooting from the field and 20 percent from the three-point line.  We forced them into eight turnovers.  We had guys stepping up and taking charges.  We had guys rotating well on defense and getting their hands on the basketball.”

The Cowboys were held to 30 percent from the field for the evening. Wyoming was outrebounded by the Aggies 41-23, as Utah State came into the contest ranking third in the nation in total rebounds.

“Offensively, I know we have our challenges,” Edwards said.  “What I told our guys was I thought in the second half we let our lack of offense affect our competitive edge on the defensive end of the floor.  I talked with our guys about sometimes we need to be willing to win a game 45-40, 55-50 rather than let our offense affect what we’re doing on the defensive end of the floor.”

The Pokes struggled from the field early, but forced four early turnovers and added a block in the opening five minutes, that saw Utah State build a 4-3 advantage. The Cowboys would miss six-straight field goals until an acrobatic layup from Marble II made it an 8-5 game with 13 minutes remaining in the first half.

Wyoming continued to cause turnovers and made the deficit one point at 11-10 on a Maldonado jumper with at the 9:08 mark of the frame. Utah State went on a 6-0 run to take a 29-12 advantage with 3:31 left in the frame. Sophomore Trevon “TJ” Taylor stopped the streak with a layup off the dish from senior A.J. Banks.

The Aggies finished the first half on a 6-2 run to take a 25-16 lead into the half. Wyoming shot 26 percent from the field in the first frame. Wyoming did force eight turnovers, but only scored five points off the Aggie miscues.

Both teams traded layups and triples to open the first ninety seconds of the second frame. But the Aggies added an 11-0 run to build a 38-21 advantage with 15:44 left in the contest. Maldonado halted the run and got to double-figures seconds later.

Sophomore Greg Milton added a pair of threes and made it a 52-35 game with under seven minutes remaining. But one of the Mountain West premier scorers in Sam Merrill added three of his own to build the lead back to 20 points a moment later.

Utah State was led by Merrill with 14 points for the evening. The senior headed into the game ranking third in the conference in scoring this season at just over 18 points per game. Sophomore Brock Miller added 11 points on the night and sophomore Neemis Queta added eight points and a game-high 12 rebounds.

The Cowboys return to action on Saturday heading to San Jose State for a 3 p.m. MT start on the Mountain West Network.