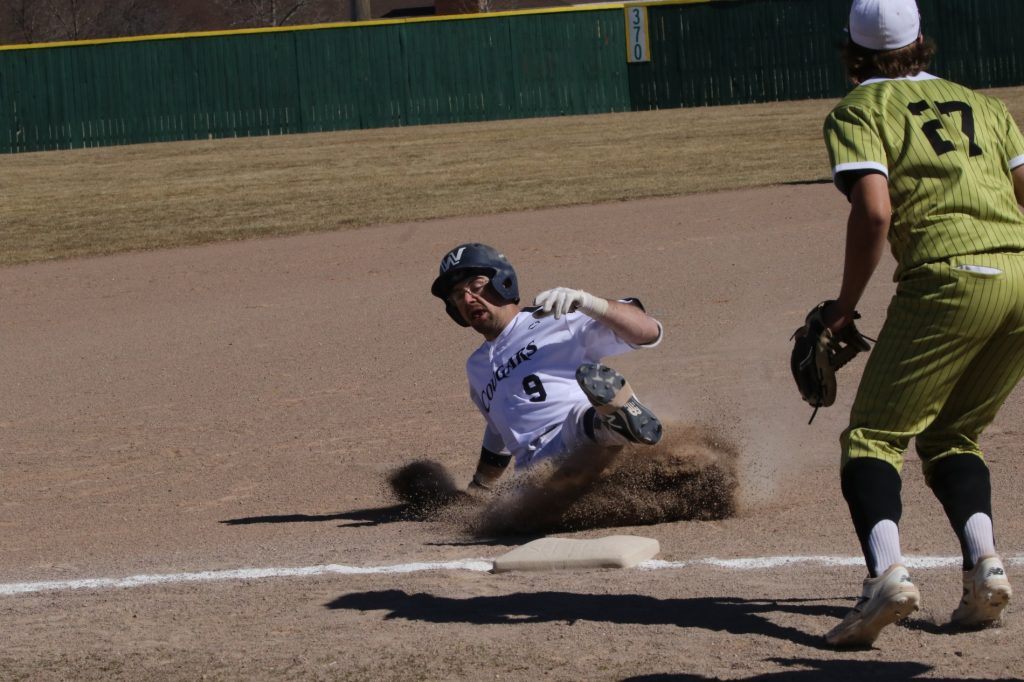 The first game saw WNCC open the game with a triple play, but NJC scored single runs in the third, fourth, fifth, and sixth to register the 4-3 win.

The second game saw Harris and Richter hold NJC to just three runs while striking out a combined five for the 4-3 win.

‘It was a huge win. Our conference is super close and it is whoever shows up that day,” Harris said. “We showed up today. The first one we lost and then we had it in our head that we were going to get the second one, so we all buckled down and got the win and hopefully it will start up a streak.”

Richter, who got the save for Harris in the second game win, said that win was huge considering the Cougars have lost many games this season in the later innings.

“It was a big deal to get the win,” the Scottsbluff graduate said. “We really needed that win and I tried my best to get the ground ball outs and try not to walk anybody, but that really didn’t work.”

The second game pitching was key in not particularly getting strikeouts but getting runs and minimizing runs. That is what Harris and Richter did in the second game.

“I wouldn’t say it was the pitching staff,” Harris said. “We just threw strikes because we knew our defense was going to handle whatever we give them. So, we just give them ball and get it to the infield and let them do their work.”

Richter said just getting groundballs and letting the defense go to work was the key.

“That was a huge key and we really needed that,” Richter said. “We just pitched to location, get ground balls, and got outs.”

WNCC opened the second game with a quick start as Ethan “Q” Miller and Dermot Fritsch had back-to-back singles. Miller than scored on a ground out for the 1-0 lead.

WNCC added two more runs in the second. Luis Alcantara reached base on a dropped second strike and then Austin Abbott had a 2-out single. After Miller walked to load the bases, Fritsch delivered a single to score two for the 3-0 lead.

The Cougars went up 4-0 in the third. Ty McAninch and Joe Kinneberg singled followed by Alcantara walking to load the bases. Matt Womack followed with a single to score one for the only run of the inning.

NJC came back to score single runs in the fourth, fifth, and sixth, but Richter came in and shut down the Plainsmen for the save and the Cougar winner.

WNCC outhit NJC in the game 10-8. Miller and Fritsch each had two hits. Fritsch also had two RBIs. The other hits came from Orozco, John Betsch, McAninch, Kinneberg, Womack, and Abbott.

The first game saw the Cougar defense come out hot, turning a triple play in the first to start things on a positive note. WNCC then got on the board first with a run in the second as Michael Felton led off with a triple and scored on a Jordan Rollins double for the 1-0 lead. NJC tied the game in the third with a run, but WNCC netted two runs in the bottom of the third for a 3-1 lead.

WNCC scored both runs with two outs. Miller led off with a walk and scored on a Jayden Orozco single. Orozco came around to score on a Felton single for the lead.

NJC came back and scored single runs in the next three innings to lead 4-3 for the win.

WNCC finished with just five hits. Felton and Rollins each had two hits. Rollins had a double with a RBI, while Felton had a RBI, run scored, and a triple.

WNCC will be back in action this weekend when they travel to Trinidad State Junior College for a 3-game series Saturday and Sunday before heading to Arizona next week for a spring break trip.