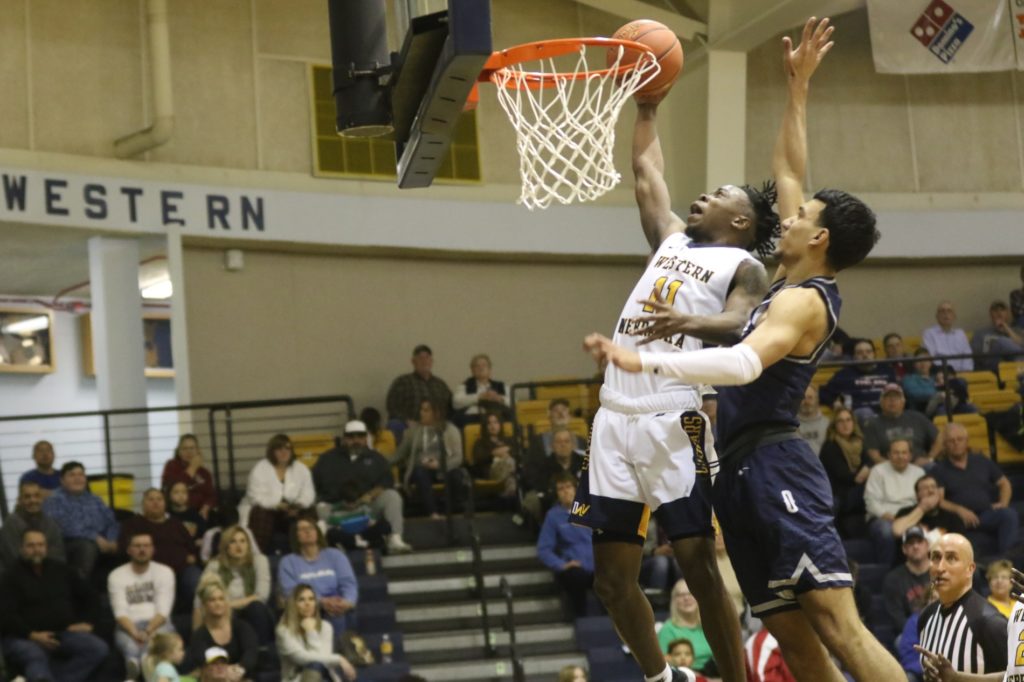 It was the Cougars third straight win but more importantly moves WNCC into second place in the sub-region at 4-2. Northeastern Junior College leads the south sub-region with a 5-0 record while Otero drops to 3-2.

Kenny Strawbridge, who finished with 16 points, eight assists, and seven rebounds, said the team played well to get the huge win over a ranked opponent.

“I thought we played amazing tonight. We came in together as a team and everybody did their thing,” Strawbridge said. “The main thing is we are gelling together at the right time. So, we played well.”

WNCC trailed at the half 48-46 to Otero, but it was the second half that was the difference. WNCC outscored the Rattlers 53-32 and limited Otero to just 31 percent shooting from the field and 2 of 12 from behind the arc in the second 20 minutes.

WNCC, shot the ball well all night, but blistered the nets in the second half, shooting 64 percent from the field and 33 percent from long range.

“We are a second half team. We come out slow sometimes,” Strawbridge said. “The second half is when we come out and play like we are supposed to play. This game we did well the second half. We shared the ball, knocked down shots, and played great defense. Defense was a big key. They have a few ball players that can go so we made sure to stop down on the defensive end.”

The Cougars did really share the ball. Allen, who verbally committed to Nebraska in December, had a triple double of 32 points, 10 rebounds, and 10 assists. WNCC also received 18 points from Jarred Rosser with 18 points, while Strawbridge had 16, Kalen Williams 14, and Elie Cadet 10 points.

WNCC trailed 50-47 in the second half and then came storming back with six straight points to take a 53-50 lead. Otero sliced the lead to two points a couple of times, the second time at 59-57 on a 3-pointer. WNCC answered back on a trey for a 62-57 lead. WNCC started to run away with the contest when Tayler Johnson had an offensive putback for a bucket and then Allen buried another trey for a 69-62 lead.

WNCC pushed the lead to double digits at 76-66 on a Williams’ bucket and led 86-73 on a Allen field goal. The Cougars closed out the game on a 13-7 run that saw WNCC go on a dunking spree with dungs by Rosser and Johnson on their way to the 99-80 win.

WNCC will have a few days to rest before they head to Casper, Wyoming, to face the No. 22-ranked Casper College Thunderbirds.

Strawbridge said they have to worry about themselves.

“We just have to play our game,” he said. “Everything will go into its place if we play well together.”