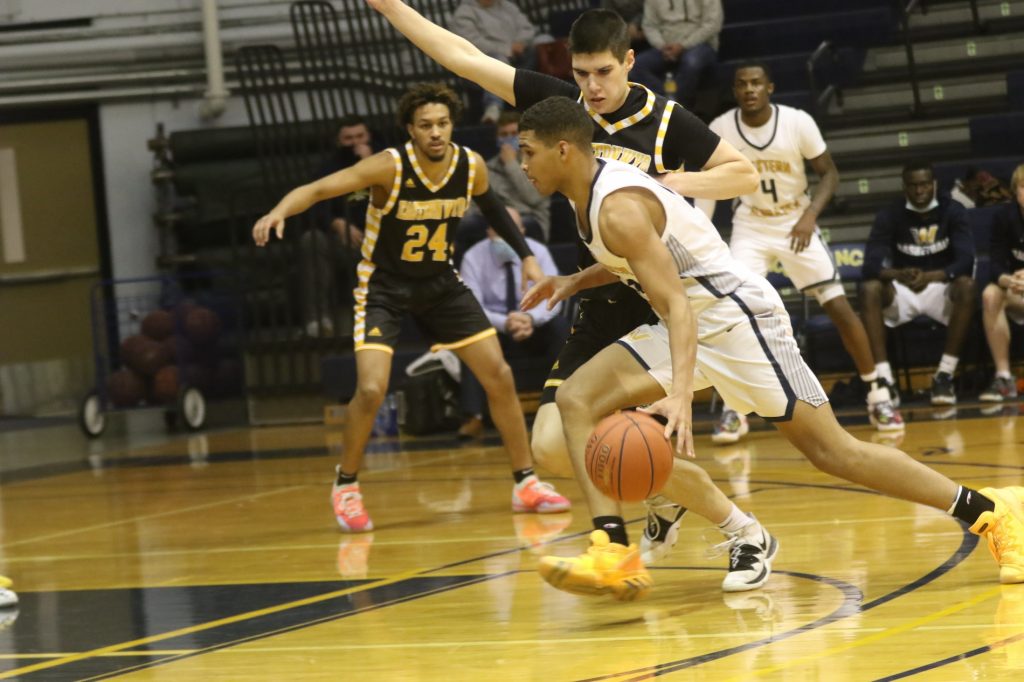 The Western Nebraska Community College men’s basketball team, who received votes in this week’s NJCAA basketball poll, never led in regulation, but it was what they did in the last 90 seconds of regulation and overtime that gave the Cougar men a thrilling 108-96 win over Eastern Wyoming College Tuesday evening at Cougar Palace.

WNCC head coach Billy Engel was proud of his team of the way they gutted out the win.

“This was very big for our guys to gut one out this way,” he said. “We need to have a roster full of guys that are willing to find a way to succeed no matter what. There were times in the first half and in the second half where things got rough and our guys could have thrown in the towel, but they didn’t. They were resilient, tough, and believed in each other. I hope that we can continue to be resilient when things get tough and we need to improve in a lot of fundamental areas as to not dig ourselves such a hole to get out of.”

The hot-shooting Lancers took control of the game from the get-go, leading all the regulation game where the score was tied just once at 81-81 at the end of regulation. WNCC trailed by three points early, the last time at 8-5. It was what the Lancers did after that which changed the game. EWC hit nine of their 15 3-pointers in the first half as they bolted to a 42-31 halftime lead.

The second half was much the same as the first half for the Lancers as they held a 53-36 lead early in the second. WNCC went on a 16-7 run to slice the lead to seven at 59-52 behind back-to-back buckets by Chase Thompson and back-to-back 3-pointers by Tyler Mack.

WNCC never got closer than that until the final minute. EWC led 77-64 before WNCC cut the lead to nine points at 77-68. The Lancers came right back and led by 10 at 81-71 with just under two minutes to play.

EWC couldn’t get a bucket to fall in the last two minutes while WNCC scored 10 straight points, including the tying bucket by Taylor Johnson with 14 seconds to play. EWC had one final chance for the win, but couldn’t get the ball to fall to force overtime.

WNCC took its first lead of the game on the opening bucket of the overtime period as Johnson hit a 2-pointer. EWC came back and led 91-85 on a 3-pointe by Sofyane Nocara with about 1:30 to play. The Lacers didn’t score again and the Cougars tied the game at 91 on a bucket by Issad Solano. Neither team could get the go-ahead or winning bucket to force a second overtime.

The second overtime belonged to WNCC. Both teams traded buckets as the score was tied at 95-95. WNCC outscored EWC 13-1 in the final three minutes to get the win.

Engel said he was proud of his team from the starters to the bench to get the win.

“I am so proud of every young man on this roster,” he said. “From the starters to the players coming off the bench to the guys that didn’t get in tonight., each one of these young men has done something to impact our team’s win tonight. With that being said, a couple young men stepped up tonight. Offensively we shot a fairly god percentage in the first half and even better in the second. Our problem was defensively, but when we really needed stops, our guys found a way to force difficult shots and come down with big time rebounds. Those are the toughness plays we needed to win this one, and what we’re going to need going forward.”

Both teams shot well, combing for 29 3-pointers. EWC had 15 from beyond the arc while WNCC had 14. WNCC shot 48 percent from the three line. The Cougars also shot 58 percent from the field while EWC was 44 percent.

A big key was rebounding. WNCC outrebounded the Lancers 47-36 and much of those rebounds came in the last two minutes of regulation and the overtime periods where WNCC held EWC to just one shot. Johnson led the Cougars on the boards with 13 rebounds. Johnson also tallied 25 points with three 3-pointers. The Cougars also got eight boards from Them Koang, who also had 18 points.

Also hitting double figures for the men was Carter Brown with 11 points, Chase Thompson with 14, Agwa Nywesh with 11, and Issad Solano with 19.

WNCC, 2-0, will be back in action Thursday when they face No. 11 College of Southern Idaho in a women’s and men’s doubleheader.