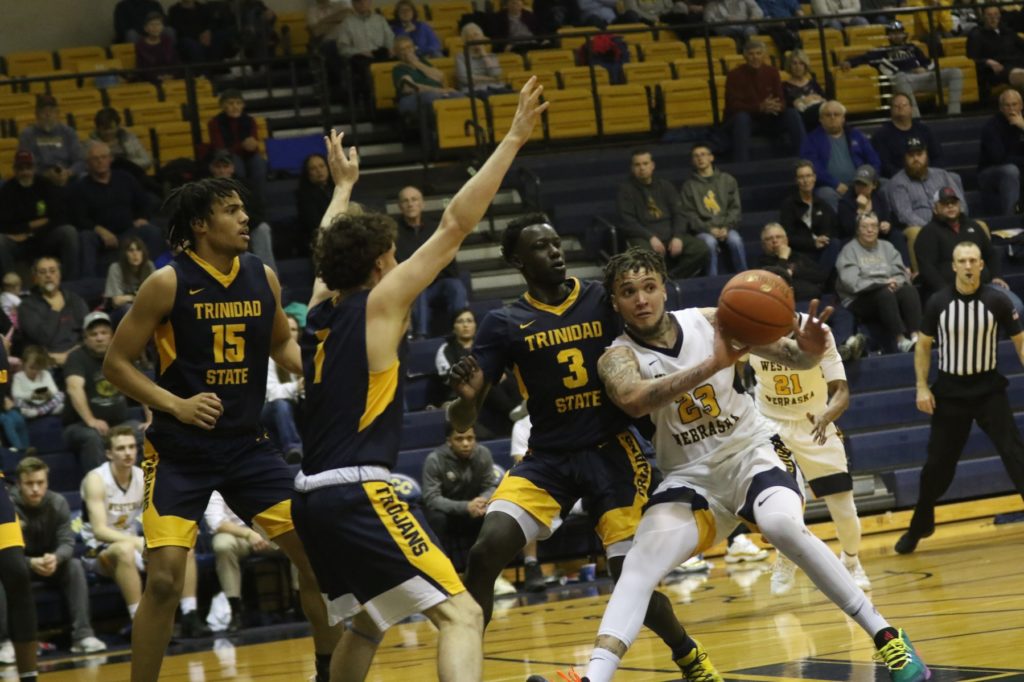 The win was huge for the Cougars as they secured a home first-round playoff game for the last weekend in February. WNCC moves to 17-10 overall and more importantly to 7-4 in the South Sub-Region.

The Cougars will look to secure the second seed in the South when they wrap up the regular season on Friday with a trip to Otero Junior College. Otero is 22-6 overall and 6-4 in conference play. The Rattlers defeated conference-leading Northeastern Junior College on Tuesday 77-67.

WNCC head coach Cory Fehringer was proud of the way his team played.

“We are proud of our Cougar team,” he said. “They young men in this locker room have faced a variety of challenges and opportunities to grow. Change and growth can be painful, and we must continue to strive to become the best version of ourselves as a team as well as our individual improvement.”

Trinidad is not an easy place to play, either. WNCC has lost at Trinidad the four previous years. The last time the Cougars won at Trinidad was the 2014-15 season when they won 101-88. Tuesday’s score was pretty close to the 2015 score.

“Winning on the road has been a major obstacle and we are thankful to get a road win at Trinidad State,” Fehringer said. “Trinidad has been able to control the series at Scott gym thus far during our time at Western Nebraska.”

The first half wasn’t going WNCC’s way early. The Cougars trailed 46-35 but then turned things around after two Kalen Williams 3-pointers and Kenny Strawbridge nailed a trey to end the half to only trail the Trojans 49-46 at halftime.

WNCC earned the first tie of the game at 51-51 when Strawbridge hit another trey and took a 55-51 lead on an Elie Cadet bucket. Trinidad game back to tie the game at 55, but WNCC went back in front for good, leading 66-57 on another Strawbridge 3-pointer.

The Trojans cut the lead to six, 71-64 on a trey of themselves, but WNCC went back up by double digits at 78-66. Trinidad cut the lead to seven points, 81-74 but WNCC closed out the game on a 17-10 run that saw Strawbridge get a big dunk with 1:43 to play and then Teddy Allen scored eight of the final nine points for the win.

WNCC’s offense was good, but their defense even better. WNCC shot 44 percent from the field and were 8 of 22 from beyond the arc. The Cougars were also 30 of 38 from the charity stripe.

Trinidad shot 49 percent and buried 10 treys, but the Trojans were just 12 of 12 from the charity stripe, which was a difference of 18 makes from the line.

WNCC had three players in double figures. Williams and Allen combined for 61 points. Allen led the way with 31 points with eight rebounds, seven steals, and going 15 of 18 from the free throw line.

Williams finished with 30 points and three treys. Williams was7 of 9 from the free throw line and had four rebounds.