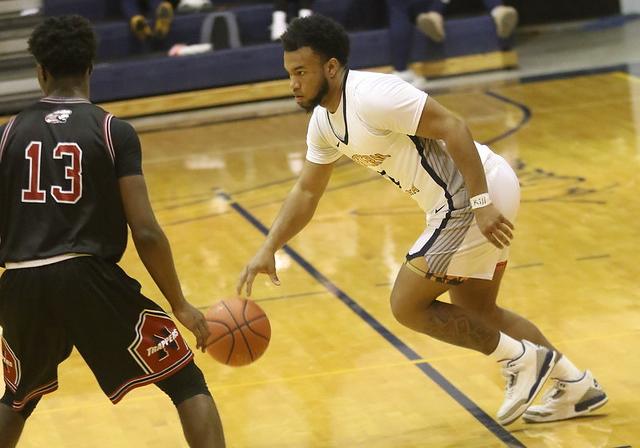 The Western Nebraska Community College men’s basketball team dropped a 78-67 contest to Northwest in the WNCC Classic on Friday.

Northwest won the contest from behind the 3-point arc. The Trappers buried 14 3-pointers compared to just three for the Cougars.

Jaren Fritz had the hot hand for Trappers, burying eight treys and finished with a game-high 30 points.

Northwest started the contest on a roll, bolting to a 20-7 lead. WNCC fought back, taking the lead at 25-23 on a Chase Thompson bucket with 4:45 to play in the opening 20 minutes.

It was short-lived as Northwest went back in front at 26-24 only to watch Taylor Johnson and Agwa Nywesh score two points each to give the Cougars a 28-26 lead. Northwest tied the game at 28, but WNCC made the last four points to lead at halftime 32-28.

The second half saw the Cougars jump out to a 45-37 lead and later at 48-43 after a Conner McCracken 3-pointer.

That was when Northwest went on a roll hitting treys, nailing seven straight 3-pointers along with one old-fashioned 3-point play to lead 64-54. From that point on, both teams traded buckets and WNCC never could cut the deficit to single digits.

WNCC had three in double figures. Thompson and Them Koang each had 17 points while Issad Solano had 12 points.

Taylor Johnson led the way on the boards with nine rebounds.

The first men’s game of the day between Lamar and Central Community College-Columbus was also a tight contest as Lamar’s Tim Montgomery drove the paint as time was running down and had a lay-in that won the contest for the Lopes 72-70.

After this weekend, the Cougar women and men will be back in action Monday when they host Laramie County Community College at 5:30 and 7:30 p.m.