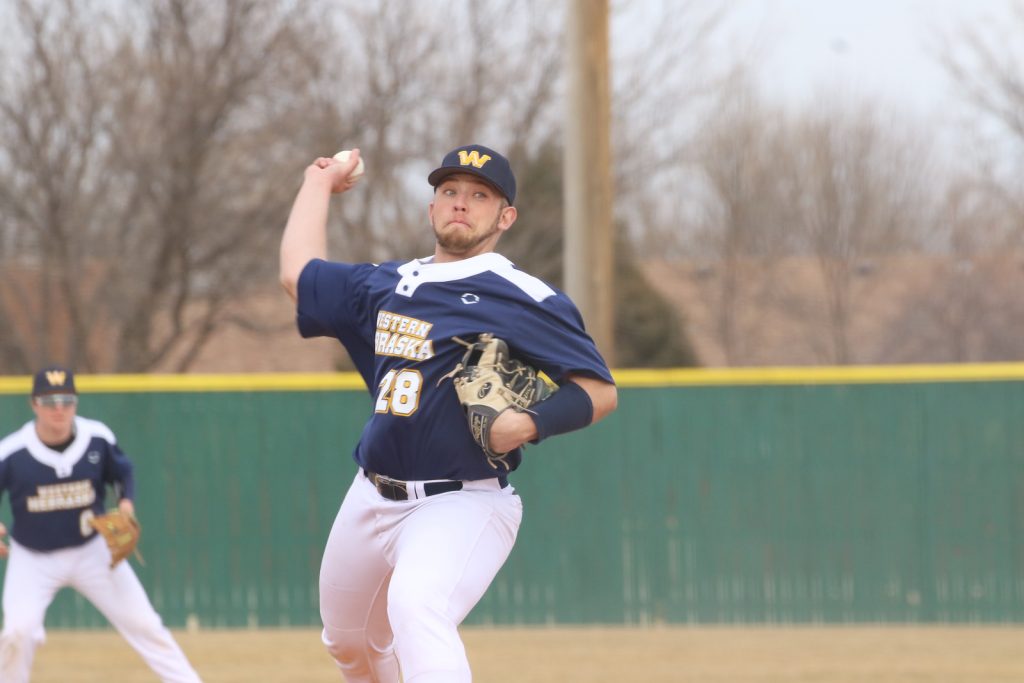 The Cougars captured the first game 7-2 behind a strong pitching performance from Dawson Hurford in getting the 7-2 win. The second game saw Miles limit WNCC to just three hits in earning the split on the day with the 8-0 win.

WNCC went 3-1 on the weekend after claiming two victories on Saturday against Miles Community College.

WNCC moves to 8-10 on the season and are scheduled to host Northeastern Junior College on Wednesday, but the status of that game will be determined in the coming days.

Offensively, the Cougars did what they needed to get the win. WNCC opened the scoring with four runs in the second and, really, that is all they needed behind the pitching of Hurford.

WNCC wasn’t through in the second as Joey Olson had a 2-out single to score Coats for the 4-0 lead.

WNCC added an insurance run in the fifth as Joe Orozco reached on an error and scored moments later on a wild pitch for the 5-0 lead.

Miles made comeback, scoring two in the sixth to slice the lead to 5-2. The Cougars, however, rallied right back with two in the seventh as Womack slapped a 2-out double that scored Luis Alcantara and Orozco for the 7-2 lead.

WNCC finished with 11 hits in the win. Orozco led the way with three hits, all singles. Orozco also scored two runs. Alcantara and Womack each had two hits. Womack had a double with two RBIs and a runs scored. Kinneberg had the other extra base hit in the game with a double.

The second game was close for four innings. Miles scratched across a run in the third for the 1-0 lead. It wasn’t until the fifth when the game got away from WNCC as Miles scored four times for a 5-0 lead and then added another three in the sixth for the 8-0 lead.

WNCC never could get untracked offensively, managing just three hits. The Cougars had two doubles in the contest from the bats of Alcantara and Dillon Fabricus. Jordan Rollins had the other hit for the Cougars.

MILES CITY, Mont. – The Western Nebraska Community College baseball team had to cancel its home game with Williston State College this weekend. Still the Cougars are playing as they headed to sunny Miles City, Montana, to take on Miles Community College in a four-game set.

WNCC and Miles hooked up for a doubleheader Saturday in 57-degree weather and the Cougars’ offense matched the heat outside, finishing with 14 hits and earning the 12-3 win over the Pioneers.

The second game saw WNCC score four late runs, including a 2-run tying double by Riley Schanaman and a go-ahead, seventh-inning run-scoring single by Quinn McCafferty for the 4-3 win to move the Cougars to 7-9 on the season.

The first game saw WNCC fall behind early as Miles had a 3-run home run in the first inning to lead 3-0. After that starting pitcher Jerson Morales settled in and shut down the Pioneer hitters. In the meantime, the Cougar offense heated up, starting in the second and managed 12 runs.

The Cougars offense started in the second when Jayden Orozco and Jordan Rollins each singled. Dillon Fabricus followed with a single to load the bases. Rei Kimura then drove in two with a 2-out single to cut the miles lead to one, 3-2.

The third inning saw WNCC bust out the offense. Luis Alcantara led off with a single and Joey Olson took the first pitch for a 2-run home to put the Cougars up 4-3. WNCC was finished as Matt Womack doubled home Orozco for a 5-3 lead.

Fabricus followed with a run-scoring single and then Womack scored on a wild pitch to make it 7-3. Alcantara scored the final run of the frame as he earned a walk to force in Fabricus for the 8-3 lead.

WNCC added a single run in the fourth when Womack singled home Orozco for a 9-3 lead.

The Cougars added two insurance runs in the sixth and another in the seventh for the win.

WNCC finished with 14 hits in the game. Dillon Fabricus and Orozco each led the way with 3-hit attacks. Fabricus was 3-for-3 with all singles while also collecting two RBIs and a run scored. Orozco was 3-for-5 with all singles and three runs scored and a RBI.

Rollins and Womack each had two hits. Womack had a double with two RBIs and a run scored while Rollins scored three runs.

Morales had a strong showing on the mound, tossing six innings in allowing three runs and four hits while striking out seven. Nick Baumann tossed the seventh in just facing three batters.

Game two was a low scoring contest with a late-inning Cougar rally. Miles took a 3-0 lead in the fourth inning and held WNCC scoreless until the sixth inning.

That was when the Cougar magic started, scoring three runs to tie the game at 3-3. The sixth started when Womack had a 2-out single. Sergio Tarango followed with a walk. JT Cafferty followed with a run-scoring single to plate the first run. Riley Schanaman then responded with a 2-strike double to score Tarango and Cafferty to tie the game.

WNCC’s seventh inning saw some clutch hitting as well. Orozco started the clutch rally with a 2-out double and scored on a single by Quinn McCafferty to put WNCC ahead by a single run.

Harold Baez finished off the win as he pitched a strong seventh inning in getting Miles’ batters to get two grounders and a pop fly to give the Cougars the doubleheader sweep.

WNCC and Miles will be back in action for another doubleheader Sunday in Miles City, Montana.