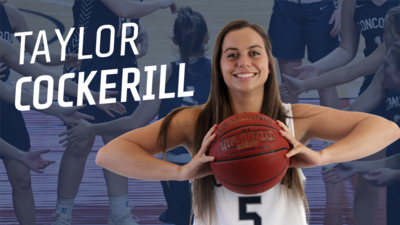 SEWARD, Neb. – After helping steer the Concordia University Women’s Basketball team to the NAIA national quarterfinals, junior guard Taylor Cockerill has been named to the 2021 NAIA All-America team by the Women’s Basketball Coaches Association (WBCA). The exclusive squad features 10 All-Americans as well as a group of honorable mention selections. The Waverly High School alum was also tabbed an honorable mention All-American by the NAIA in 2019.

As the emotional leader of the Bulldogs, Cockerill also paced the team in points (14.7), rebounds (6.5) and assists (3.23) per game this season. She posted shooting percentages of 41.3 from the field, 37.1 from 3-point range and 77.8 from the foul line. Cockerill scored 20 or more points in eight separate games, including two 33-point outings. In the national quarterfinal clash with Morningside, she turned in 17 points, 13 rebounds and nine assists while narrowly missing out on a triple-double.

Cockerill ranks 14th on the program’s all-time scoring list with 1,374 career points. In 106 games as a Bulldog, she has also totaled 498 rebounds, 259 assists, 171 steals and 150 made 3-point field goals. Her 40-point game as a sophomore ranks as the second highest single-game total in school history.

Following the national tournament, Head Coach Drew Olson said the following about “TC,” as she’s known: “She’s pretty special. She’s one of the greatest of all time in our program’s history with the things she accomplished – and that’s just in three years. Fierce competitor. Amazing teammate. Amazing leader. One of my favorites to get to coach. I know God has plans for her. I don’t know what that is. I hope she comes back – that’s selfish. I love coaching her.”