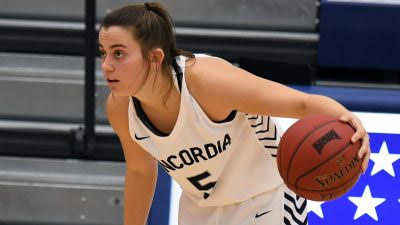 SEWARD, Neb. – Two perennially powerful GPAC programs met inside Friedrich Arena on Saturday (Nov. 14) afternoon, both seeking their first wins of the 2020-21 season. The 11th-ranked Concordia University Women’s Basketball team rose to the occasion with its best outing yet. The Bulldogs built a lead as large as 22 points, withstood a late push from Northwestern and earned an 83-72 victory.

Fifteenth-year Head Coach Drew Olson saw considerable growth in his team since Tuesday’s loss to Midland. This was the type of confidence builder the young Bulldogs (1-3, 1-1 GPAC) needed.

“I saw a ton (of growth),” Olson said. “We weren’t perfect today, but we were good enough. I love how we started the game with a lot of confidence. Defensively we were really good at times and I like our tempo we played at. Northwestern battled. They really kind of scared us at the end, but I loved that it made our team fight even harder and find ways to win at the end.”

As a pure scorer, slashing guard Taylor Cockerill may go down as one of the best ever at Concordia. The Waverly High School product led the team on Saturday with 25 points on 8-for-12 shooting from the floor while moving past 1,000 career points (30th player in program history to reach that total). Cockerill is someone the Bulldogs know they can count on as her more youthful teammates continue to develop.

A key area of improvement for Concordia on Saturday was in the turnover department, where it got back to dominating. The Bulldogs forced 23 turnovers while committing only 11. They also shot the ball more efficiently – 41.7 percent (10-for-24) from beyond the arc and 85.0 percent (17-for-20) from the foul line.

After trailing by 19 at the half, Northwestern (0-4, 0-1 GPAC) got back into it with the help of Emilee Danner’s hot shooting stroke (7-for-11 from 3-point range). The Red Raiders got as close as five points (72-67) in the fourth quarter. That’s when Concordia stepped up its game in the clutch. Mackenzie Toomey emerged with two of her five steals in the closing stretch and Rylee Pauli, Cockerill and Taysha Rushton each came through with crucial buckets.

A back-breaking trey by the freshman Rushton with 2:28 remaining pushed the margin back to 10. This was real progress. Said Cockerill, “I think it was super important for us to get this win. We came in focused, ready to play and ready to work together. I think we were just excited to play again … We are pretty young, but we have girls stepping up and hitting big shots. They’re a lot of fun to play with.”

Now a junior, Pauli has taken on a much larger role in the frontcourt. She contributed 15 points, seven rebounds and two steals. Though Rushton struggled with her shot, she made the big one at the end and notched her first career double-double (11 points and 10 assists). While earning the start, Faith Troshynski knocked in nine points on 3-for-3 3-point shooting. Mackenzie Koepke chipped in with eight points and five rebounds.

Danner went off for 32 points for the visitors. Sammy Blum (10) and Molly Schany (10) also reached double figures for a Northwestern squad that has a different look to it. Red Raiders (38.0 percent shooting as a team) other than Danner were held in check offensively.

Said Olson of Cockerill, “I’m really proud of her. She’s an incredible player and a big-time scorer. Especially this year, we’re going to really rely on her to carry her at times.”

A busy stretch is ahead next week. It will begin on Monday with a nonconference tilt at Peru State College (2-1) with tipoff set for 7 p.m. CT. Visiting fans are not permitted by Peru State.