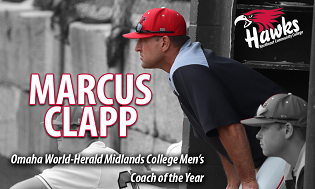 OMAHA, Neb. – Northeast Community College Head Baseball Coach Marcus Clapp orchestrated one of the best seasons in college baseball. And, it all came together in just the second year of the Hawks baseball program.

For his efforts, Clapp was named the Midlands College Men’s Coach of the Year, it was announced by the Omaha-World Herald on Wednesday.

The Hawks finished with 37 wins in 2019, after going 18-38-1 in their inaugural season. Northeast eventually went on to win the ICCAC Tournament, the North Plains District Championship and a first-ever trip to the NJCAA DII Baseball World Series in Enid, Okla. The Hawks went 2-2 at the World Series, before falling to the eventual runner-up.

Prior to the World Series, Clapp was named the North Plains District Coach of the Year, as well.

“Coach Clapp is an exceptional coach whose commitment to his players shows in their development on the field and in the classroom,” said Kurt Kohler, dean of student life and athletics. “He’s well-deserving of this honor; in just his second year he led the Northeast baseball team to the World Series, an accomplishment that rarely happens with new programs. We are proud of the work Marcus does for Northeast.”

A McCook, Neb., native, Clapp previously served as the University of Nebraska-Kearney’s top assistant baseball coach. He was the pitching coach for the Lopers, where he cultivated a solid pitching staff for the program, including developing an All-Mid America Intercollegiate Athletics Association First Team pitcher during the 2016 season. Clapp’s entire staff at UNK had a strikeout-to-walk ratio of three-to-one.

Before his work at UNK, Clapp was an assistant baseball coach at Scottsdale Community College in Arizona for nine seasons. It was there he helped develop the Fighting Artichokes into an NJCAA Division II national power, including four trips to the NJCAA Division II World Series in 2007, 2009, 2012 and 2013.

In his first year as the Artichokes pitching coach, the pitching staff set new school records for both ERA (3.46) and strikeouts (417). In 2007, the pitching staff reset those records with a 2.92 ERA and 519 strikeouts and sent two pitchers to the National Junior College All-Star Game. Clapp, in 2012, saw his closer record 17 saves and a nation-best 0.20 ERA. In 2013, Coach Clapp had two pitchers drafted in the third and 21st round of the MLB Draft, respectively.