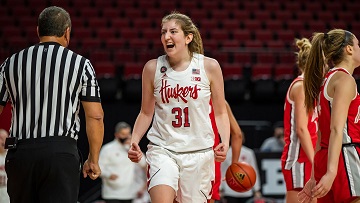 Cain, a 6-5 center from Middletown, N.Y., nearly produced her second career triple-double by erupting for 22 points, 12 rebounds and nine blocked shots to power Nebraska to a 63-55 victory over previously unbeaten and then-No. 15 Ohio State on Saturday at Pinnacle Bank Arena in Lincoln.

Cain, who tied her career high with 22 points, hit 10-of-14 shots from the field against the Buckeyes while her nine blocks tied the second-highest individual total in school history. Her block total trailed only her 11 blocked shots as a freshman against Florida Atlantic, when she produced Nebraska’s first-ever points-rebounds-blocks triple-double.

A graduate student who is pursuing her Master’s of Business Administration at Nebraska after earning her bachelor’s degree as a management major in just three years, Cain earned her first Big Ten Player-of-the-Week award of her career. An honorable-mention All-Big Ten choice last season and a two-time Big Ten All-Defensive selection (2018, 2020), Cain was a four-time Big Ten Freshman of the Week in 2017-18.

The three-time Lisa Leslie Award candidate currently ranks No. 2 among all active NCAA Division I women’s basketball players in career blocks (314). Her total ranks No. 6 in Big Ten history and is  Nebraska’s school record. She leads the Big Ten in blocks (34) and blocks per game (3.1 bpg) through 11 games this season and has anchored a defense that has surrendered just 59.2 points per game over the last five contests, despite all five coming against top-36 NET ranked opponents that entered the game averaging better than 80 points per contest.

Cain and the Huskers will be back in action Tuesday when they battle Minnesota. Tip-off between the Big Red and Golden Gophers from Pinnacle Bank Arena is set for 3 p.m. (CT) with live television coverage by the Big Ten Network. Live radio will be provided by the Husker Sports Network.