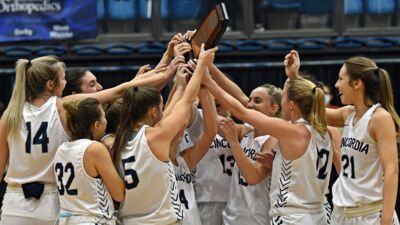 PARK CITY, Kan. – A combination of jitters, rustiness and stifling defensive play by the opponent seemed to be behind a rough start for the 16th-ranked Concordia University Women’s Basketball team. It wouldn’t last. Taylor Farrell kept the Bulldogs afloat in rocky waters and a spirited second half made for a finish lacking drama. Concordia pulled away from 19th-ranked Loyola University New Orleans, 71-54, and has advanced to the final site of the NAIA Women’s Basketball National Championship.

Head Coach Drew Olson will lead the program back to the Tyson Events Center in Sioux City, Iowa. The Bulldogs (21-8) are one of 16 teams left standing in the tournament after emerging from the Park City Bracket B opening round on Saturday (March 13).

“We have a lot of players who have never been a part of the national tournament, so you could see the nerves were there,” Olson said. “And then second, I thought Loyola played really well. They hit some shots we didn’t expect them to hit. They were the better team that first half.

“That’s why this team is so special – we just seem to have one or two players step up when we really need it. It’s been different players all year. Taylor Farrell was amazing today. She kind of resuscitated us today and brought us back to life.”

Spacious Hartman Arena, the venue for the Park City Bracket, provides a shooting backdrop unlike any other the Bulldogs see during the regular season. It took some time, but eventually Concordia found the mark while following its leader, Taylor Cockerill. The Waverly native sliced and diced her way to 22 points, including 18 in the second half. The Bulldogs started the game a miserable 3-for-26 from the floor before recovering to shoot 50.0 percent (16-for-32) in the second half.

A 21-7 spurt to begin the fourth quarter turned a tenuous lead (48-47) into a late runaway decision. Cockerill began that stretch with back-to-back buckets and iced the game by hitting 4-of-5 free throws (after a foul on a 3-point shot and then a technical) that came in succession. For good measure, Mackenzie Koepke curled in a left corner trey that set the bench on fire in the final moments.

Somehow, Concordia turned a 14-point deficit in the first half into a 17-point victory. Said Cockerill, “The shots weren’t falling early, but we stayed composed knowing we’re not just a 3-point shooting team. We can drive and find other shots. We have that confidence to step up and hit them. Yeah, you miss one, you miss two, but we trust in each other. We have a lot of belief in each other.”

The rally would not have happened without the efforts of Farrell, who went 3-for-3 from long range in the first half and finished with 14 points. She also tied the game in the third quarter with a driving three-point play. Point guard Taysha Rushton struggled with her outside shot, but she still impacted the game and finished with 10 points, four rebounds, three assists and two steals. Koepke added eight points and five rebounds. Off the bench, Mackenzie Toomey returned to the floor and supplied seven points, four rebounds and a blocked shot.

It takes a special kind of resilience to shake off a field goal drought of more than 13 minutes – and still win. Olson wasn’t surprised to see Cockerill play like the star she is. “She missed a bunch of layups and was out of sorts, but she’s such a tough player that she can compose herself and get grittier. She found a way to get to the rim and score any time she wanted.”

Loyola (21-2) is no stranger to the national tournament having made its seventh-straight appearance. The Wolf Pack came into the game ranked in the top five nationally in rebound margin and in the top 25 of the NAIA in field goal percentage defense. They got a team best 13 points from Kennedy Hansberry. Loyola managed to go just 6-for-35 (.171) from the field in the second half.

The 16 remaining teams in the national field will be reseeded by the Women’s Basketball National Selection Committee and placed in a bracket for the final site. Action in Sioux City will run from March 18-23. Said Olson, “We’ve been there before. We know what that arena is like and what the environment is like. We’re excited to be back there again.”