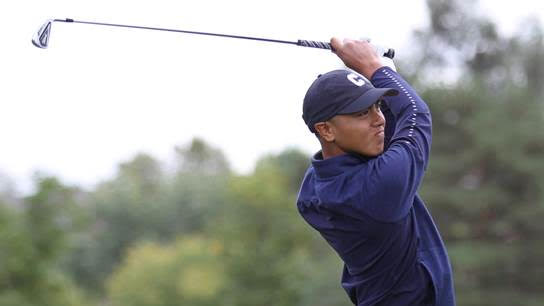 ELKHORN, Neb. – From Monday to Tuesday’s (Sept. 28-29) round, the Concordia University Men’s Golf team cut 12 strokes off its total. However, it wasn’t enough to move out of ninth place in the conference leaderboard. That’s where the Bulldogs stand with 36 holes of GPAC Championships action in the books. The first two rounds of conference play were contested at Indian Creek Golf Course in Elkhorn, Neb.

“We didn’t play as well as a team as we thought we would,” Muller said. “There’s a gap in the standings where we’re at compared to the rest of the pack. I definitely hope it motivates us to work hard and close that gap in the spring season.”

With a good run next spring, Drew D’Ercole could still potentially jump into a top 15 spot required for all-conference honors. He is currently in 28th place (out of 55 GPAC golfers) with a score of 80-82–162. For comparison’s sake, the top individual in the GPAC is Morningside’s Jonny Douglas with his 72-67–139. It took a score of 151 or lower to hold down a top 10 spot in the conference.

Before packing up the clubs for the remainder of the fall semester, the Bulldogs are scheduled to compete at the Nebraska Intercollegiate next Friday and Saturday (Oct. 9-10) at Norfolk Country Club in Norfolk, Neb. Dates for the spring GPAC Championships have not yet been announced, but the final two rounds will be held at Dakota Dunes Country Club in Dakota Dunes, S.D.