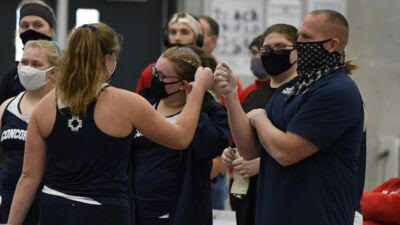 CRETE, Neb. – The Concordia University Track & Field program ventured into competition for the second time this indoor season and for the first time in 2021 as a competitor at the Scott Nisely Memorial Classic hosted by Doane. A large field of Bulldogs combined for 12 event titles at Saturday (Jan. 16)’s meet held inside Fuhrer Fieldhouse in Crete, Neb. Athletes from five Nebraska GPAC schools took part in the meet.

“Being competitive is the No. 1 thing I talked to our athletes about going into this meet,” Beisel said. “Everyone came off a long break, although we did get an extra week of training in. We’re really pushing through this phase of the season with some hard training. We don’t expect amazing things in this first meet (back from break). That being said, we saw some really good things in almost every event area.”

It should be noted that there are no automatic national qualifying marks moving forward this indoor season. In order to keep the numbers to a minimum (due to COVID-19 protocols), only the top 16 NAIA competitors in each event will earn spots at the national championship meet. Based on the results on Saturday, throws coach Ed McLaughlin will certainly expect to see some of his athletes at nationals. Joked Beisel, “Coach McLaughlin is hard to please, but I think he had a lot of things to smile about today.”

On the women’s side, De Jong (weight throw) and Elle Luehr (shot put) made it clean sweep of throws titles at the Nisely Memorial. De Jong approached her personal best in the weight throw with a first-place toss of 56’ 8 ¾” that currently ranks No. 1 nationally. Also in the weight throw, Sarah Ragland turned in a mark of 54’ 1 ¾” and placed third. Jordyn Anderson and Luehr have also eclipsed 50 feet this season in the weight throw. Meanwhile, Luehr’s winning shot put throw measured in at 42’ 6 ¼” (good for No. 2 in the NAIA).

Also in the field events, Concordia got big performances from sophomore Wyatt Loga and freshman Amy Richert. Both achieved new personal bests with Loga jumping 6’ 8” for a runner-up claim while Richert leapt 5’ 5 ¼” and won the women’s high jump. Richert is currently ranked in the top 10 of the NAIA for both the high jump and pentathlon. In the triple jump, Taylor Moes took the event title with a jump of 34’ 9” (teammate Adrianna Sims placed second).

The Bulldogs did not enter into any of the relays, but they did collect seven of their event titles on the track. Beisel came away pleased with the work of a distance group that he’s been pushing hard. Standout Kylahn Heritage galloped to wins in the mile (5:25.05) and 3,000 meters (11:05.97) in a stellar day. Additional victories on the track were delivered by Rachel Battershell (600 meters), Jacob Jennings (400 meters), Rachel Lewis (400 meters; 60 hurdles) and Calvin Rohde (mile). Rohde (4:30.92), Camden Sesna (4:31.53) and Micah Willweber (4:43.68) each performed well in the mile.

Battershell and Lewis will compete closely throughout the season in a variety of events. Battershell placed second to Lewis in the 60 meter hurdles. Battershell ranks in the top four nationally in the 400 and 600 meters. She ran the 600 in 1:37.67 on Saturday, just holding off teammate Jacee Pfeifer (1:37.93). Beisel was happy to see Pfeifer back in action after she missed the Concordia Early Bird meet in December. On the men’s side of the 600, Christian Van Cleave (1:24.28) placed second.

A Lincoln Lutheran High School alum, Puelz is a special athlete. She bumped up her season best in the pole vault to 12’ 6 ¾” in another winning effort. In that same event, freshman Amira Cummings cleared 11 feet for the first time in a college meet. Zach Bennetts (14’ 9 ½”) was Concordia’s top men’s pole vaulter at the meet.

Said Beisel, “I’m very satisfied with where we’re at. I know there are some kids who have more things they want to do. We didn’t do any relays today. Overall, I’m happy. We have work to do, but we also have some things to feel good about.”

The Bulldogs will now brace themselves to host a meet for the second time this indoor season. The Concordia Polar Dog Invite will unfold next Friday (Jan. 22) with the action set to get underway at 4 p.m. CT from the Fieldhouse. A tentative meet schedule can be viewed HERE.