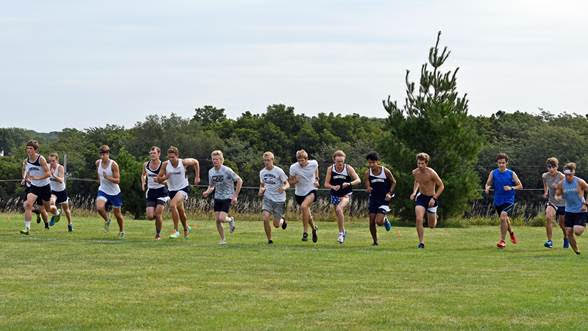 SIOUX CENTER, Iowa – It had been 176 days since any Concordia University athletic team had competed in an official competition. That drought ended on Saturday (Sept. 5) morning when the Bulldog Cross Country teams paced Dordt’s home course in Sioux Center, Iowa. Head Coach Matt Beisel’s squads came away with third-place finishes (out of nine teams) for both women and men. The women finished with a total of 90 points while the men had 87 points.

Led by sophomore Kylahn Heritage (Nampa, Idaho), the women’s team is aiming for a repeat of its 2019 GPAC championship season. At the Sunflower Opener, Concordia got an early look at where it stands in comparison to its conference rivals. The meet featured eight GPAC squads on the both the men’s and women’s sides.

“I think it’s the best early showing at an early conference-loaded meet that my guys have had since I took over the program,” Beisel said. “We almost had Northwestern (13 points behind) so I thought it went extremely well. We knew the potential existed and they stepped up and did what they had to.

“On the women’s side, we were missing two of our top runners, but everyone ran really well. Compared to our time trial last week there was hardly anyone that didn’t have a huge improvement – in many cases by 40 seconds or more. I told both teams not to be satisfied with this. At the same time, be happy with a great early season effort. What happened today doesn’t define what happens eight weeks from now.”

Nineteen Bulldog women navigated the course on Saturday when they were met by calm winds and a temperature near 70 degrees as the 5k race got underway. This was the same site where Concordia celebrated its GPAC title in November of last year. Heritage paced the Bulldogs at the Sunflower Open by clocking in at 19:16.21, placing her in 16th out of 128 runners in the field. It was a fine showing for Heritage, especially with her having been limited during preseason prep. The newest freshman standout is Grace Reiman (Hastings, Neb.), who was second on the team in a time of 19:45.73 (25th overall).

First-place Dordt and second-place Morningside managed to outrun the defending GPAC champs. The Defenders appear to have restocked the cupboard with two freshmen placing inside the top 15 of the leaderboard. Concordia did defeat conference opponents in Northwestern (fourth), Hastings (fifth), Dakota Wesleyan (sixth), Midland (eighth) and Mount Marty (ninth).

Beisel noted that Sesna ran a personal best while calling Rohde’s first collegiate race “exceptional.” Beisel also lauded Heritage for how she competed after mostly elliptical work leading up to the meet. Reiman’s time eclipsed her high school PR by 40 seconds. Said Beisel of his teams, “They’re in a great mood. I think they know they have more in them.”

The season will continue next Saturday (Sept. 12) at the Bronco Stampede hosted by Hastings at Lake Hastings Park). Race time is set for 10 a.m. CT. The 2020 schedule features six regular-season meets prior to the conference championships on Nov. 7. Results can be found below.